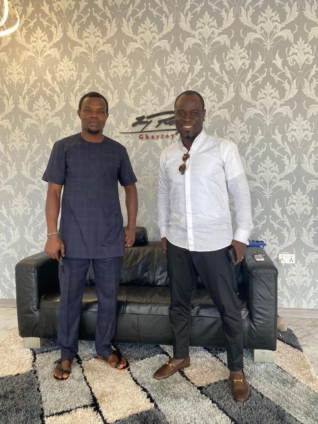 Believe it or not took some years to convince the former Ghana goalie, Richard ‘Olele’ Kingson to honour an interview on the Joy Sports Link on Joy FM which I host. Eventually when he agreed to it, the interview coincided with his birthday and also marked 10 years since Ghana won their opening game at the 2010 World Cup held in South Africa.

Two days to the interview, I spent about four hours with him at his residence in East Legon, Accra and had deeper insights into some back stories behind some happening in Ghana’s Black Stars team. The one hour and 45 minute interview also taught and re-affirmed certain lessons and principles of life in general.

Your faith matters a great deal

Kingson, who is a good friend of mine, made me understand that his faith as a Christian carried him through the tough challenge of rising to the top in sport which obviously is loved by all but has an arduous path.

The former Wigan Atheltic goalie said decided to take his faith seriously after an experience with his late father. Richard Kingson’s father had many children who he made genuine efforts to look after.

“He gave me my school fees and asked to me return the money. My dad gave my fees to one of my sibling to buy her books for the term.”

Young Richard at the time struggled to understand why his father took that decision but later concluded that he could only rely on God almighty, because he had no one.

Throughout his career, he has had encounters which have further strengthened his faith in God as a Christian. That day he went into his room and kept fasting and praying and surrendered himself to God.

Three days after this incident, young Richard who was then a primary school pupil, was given a full scholarship for the basic and junior high school level.

Another instance was when a mysterious 11 year old boy in his former neighbourhood told him that he would represent Ghana at the World Cup during a time when he was not the first choice goalkeeper for Ghana’s national team. He had faith and prayed about it and it came to pass.

He revealed during the interview that he has since not set eyes on the boy.
He has a much publicized relationship with the founder of the Synagogue Church of All Nations, Prophet T.B. Joshua whose football team (Emmanuel FC) he manages in Ghana. He met TB Joshua at a time when his football career was negotiating a very challenging curve while his marriage was also experiencing rough moments. He and his wife also wanted to have a second child but was unsuccessful for many years.

Eventually his wife Adelaide was delivered of a demonic spirit at the Synagogue Church of All Nations and calm has been restored in his marriage as well.

Kingson says: “Now I am really enjoying my marriage. Things have changed for the better.”

He strengthened his faith as a Christian and it has impacted his career greatly. God reigns supreme and when you acknowledge his place in your life it will see you through all the changing scenes of life.

Anything can happen – we must keep hope alive

Another interesting revelation made in the interview was the fact that ahead of Ghana’s participation in the FIFA World Cup he was the fourth choice goalie, behind Sammy Adjei, George Owu and Philemon McCarthy.
“I needed determination hard work and discipline and also kept pushing to get myself up there,” he said.

This one teaches all to keep hope alive irrespective of the situation. Ahead of Ghana’s participation in the FIFA World Cup in Germany, the Black Stars played at the AFCON in Egypt and Sammy Adjei who was in top form at the time, was first choice. By regular technical calculations Sammy Adjei was the man to keep his place as first choice goalie.

But Coach Ratomir Djukovic eventually decided on Kingson who initially was considered as surplus to requirements. Of course the key denominator here is the hard work. Over here I learnt that no matter how touch the situation is, something can change for the positive once we have life.

Leaders must allow others to grow

In team situations where goals are to be met, leaders must sometimes take the back seat and push others to get the job done. Back in 2002 when Stephen Appiah was announced captain of the side, Richard Kingson was clearly the man to lead the team as the next captain after C.K. Akonnor who is now Head Coach. But the younger and less experienced Stephen Appiah was chosen. The latter tried to object but Kingson tapped him on the shoulder and assured him of his full support and asked him to accept the band.

That decision by Kingson was to prove a golden one because it paved way for a new brand of leadership (the inspirational type) by Stephen Appiah. The decision was a deviation from earlier ones which cost the team which cost results and big achievements. One of the most glaring examples is the Senegal ’92 Africa Cup of Nations, where in the absence of suspended Skipper Abedi Pele, the band was handed to Tony Baffoe to the displeasure of some team mates.

Tony Yeboah revealed in a recent interview with GTV Sports Plus, that he played that game with anger because he had been overlooked in assigning the captaincy. Kingson looked beyond himself as an individual for the greater good and that stance must be applied by all persons playing leadership roles.

Sacrifice in every endeavor is key

Kingson also made a chilling revelation that his wife suffered a miscarriage as a result of his reluctance to honour a Black Stars invitation.
Kingson told me that his then pregnant wife, refused to allow him honour an invitation by the Black Stars team for a game against Slovenia in May 2002. It was simply because she was unhappy about some alleged ill treatment by the GFA.

“She always listened quietly anytime I complained about treatment by the national team but that day she let out her real feelings about the subject. She refused to allow me travel with the team when all arrangements had been made.”

“She told me that the insults that fans hurl when things go wrong always hurt her greatly and that she wanted an end to the phenomenon,” he revealed.

Kingson further narrated that his wife locked their bedroom door as a result of his insistence to travel with the team for the Slovenia game.

“I packed my passport and my luggage and gave them to a friend at home to send to the airport for check-in because the team was ready to travel,” he described.

At a point she softened her stance after he had assured her that it would be his last game for Ghana’s Black Stars and asked her to prepare him some food. A few minutes later, Mrs Kingson reverted to her earlier stance, which forced Richard to say he also would not travel anymore but that was a lie.

He further narrated that his wife unlocked the door. “All the while I was looking for a chance to run away. As I run through the little space and my body hit hers and she fell as a result. I ran away in what I was wearing and had to go and change at the airport. We travelled but when I came back my wife had suffered a miscarriage. She was three months pregnant.”

This in my estimation is one of the highest heights of sacrifice anyone can make in the bid to achieve an aim. Kingson was aware the trouble his actions (service to his nation) could cause in his home. He knew, that running away from home to play for Ghana without the blessing of his wife could create tension. Little did he know that it was landing him into an even bigger pit.

But at all said and done, that sacrifice, plus other subsequent ones, helped him improve his form while also contributing massively to an achievement that united Ghanaians in 2006 – qualification to the World Cup.
From this rather chilling story, I learnt once again that to reach the top we must work and deny ourselves certain everyday conveniences.

DISCLAIMER: The Views, Comments, Opinions, Contributions and Statements made by Readers and Contributors on this platform do not necessarily represent the views or policy of Multimedia Group Limited.
Tags:
Black Stars
Nathaniel Attoh
Richard Kingson