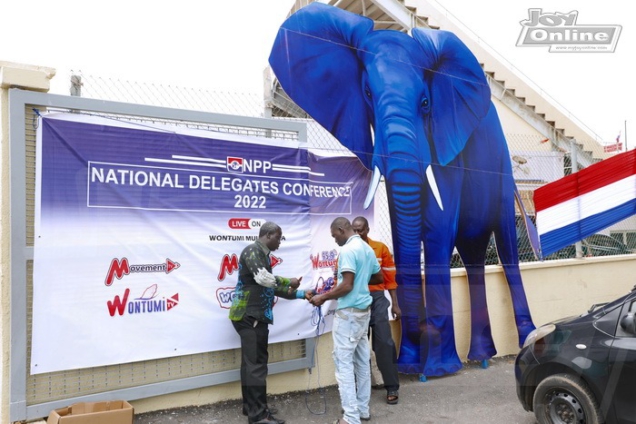 Hundreds of supporters of the governing New Patriotic Party (NPP) have arrived at the Accra Sports Stadium, for this year’s National Delegates Conference.

Commuting from the length and breadth of the country, the visibly enthusiastic delegates were spotted in colourful party regalia, manifesting their love for the party.

From NPP branded smocks, hats, shirts and other colorful attires, the party faithful were seen interacting with one another ahead of the official commencement of proceedings.

The Conference is expected to officially begin with an address by the President of the Republic, Nana Akufo-Addo and other key party functionaries.

Ahead of this, those who had not had their breakfast this morning, are seizing the opportunity to feast on the vast array of dishes mounted by vendors at the inner and outer precincts of the Accra Sports Stadium.

With hundreds of people in and around the venue for the Conference, there’s also heavy security presence to forestall and quell any disturbances.

Meanwhile, a team of poised medical personnel is also at the venue to attend to any health emergencies that may arise.

Amongst other things, the NPP’s National Delegates Conference will elect a new crop of national executives to man the affairs of the party, going into the 2024 general election and thereafter.

Each national executive when elected will serve a four-year mandate in office; fronting the interest of the party.

In this regard, supporters of the various aspirants in this year’s contest are also visibly present at the Stadium.

Some of the supporters, who spoke briefly to MyJoyOnline.com expressed optimism about the fortunes of their candidates; adding that they look forward to a peaceful and successful Conference.

In all, a total of 6,166 delegates will be expected to vote at this year’s Conference.

DISCLAIMER: The Views, Comments, Opinions, Contributions and Statements made by Readers and Contributors on this platform do not necessarily represent the views or policy of Multimedia Group Limited.
Tags:
NPP
NPP National Delegates Conference