One ribbon snip and the bridge collapses 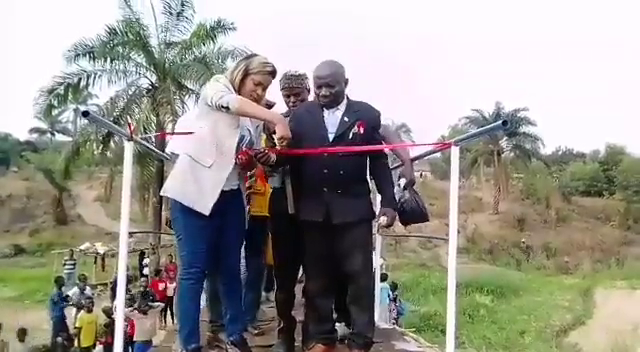 At first sight it looks as if the bridge was being held up by a ceremonial ribbon.

One simple scissor snip at the opening ceremony and the whole thing collapsed.

The new concrete footbridge over a small river in part of the capital of the Democratic Republic of Congo was backed by benefactor Hurlaine Badila.

Having wielded the scissors, she is seen on video desperately holding on to the jacket collar of another dignitary to avoid falling into the water.

On the widely shared footage, cheers can be heard turning into shouts of concern as people rush forward to rescue those who were stuck.

Bridge collapses while being commissioned in DR Congo. pic.twitter.com/hIzwKWBx9g

It is not clear if anyone was seriously hurt.

The video footage reveals that the concrete had snapped in the middle and the broken bridge then made a V-shape as parts of it lay in the river.

It is believed that the new bridge had been built by people who lacked the necessary skills and miscalculated the amount of cement that was needed in the concrete to make it strong enough.

Ms Badila, and her charity called DJCEP, had supported the construction of the bridge in Kinshasa’s Mont Ngafula neighbourhood after she saw the poor state of the one that had previously been used.

“This charity is not for me alone, but for you my mothers and elders, those younger than me and those who have the age of my fathers,” Ms Badila can be seen on news footage telling the crowds who had turned up to celebrate.

“I need your support, and need you to support DJCEP with all your heart, so that all together we can do what? Achieve better.”

Moments later the ruins of the bridge were lying in the water.