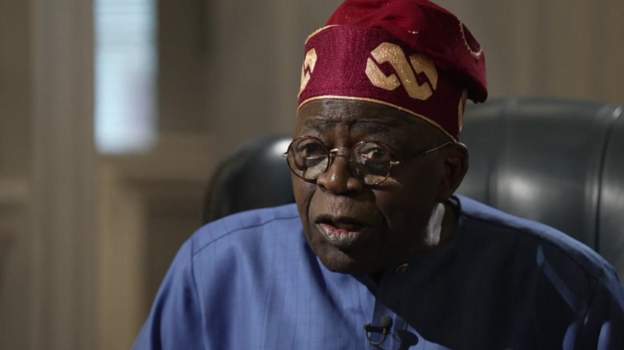 At a recent much-publicised event in London, questions from the press were all answered by aides.

Frustrating for those present, perhaps, but more so for the Nigerians clamouring for answers ahead of February’s election, not just on the key policy issues of insecurity and unemployment, but on how Mr Tinubu amassed his personal wealth.

Finally, he has broken his silence and agreed to an interview with the BBC.

I asked him just how a Tinubu presidency would be different from the current Buhari presidency – after all, they are both from the ruling All Progressives Congress (APC).

“I am different. I am Bola Ahmed Tinubu. I have governed Lagos. I’ve built a modern state that could be a country on its own. I have led an administration that’s so prudent.”

Despite being credited with reshaping Lagos, Nigeria’s commercial hub, the question of his personal wealth – and the source of it – is a big point of contention for Nigerians.

If you’re visiting the wealthy suburb of Ikoyi in Lagos, you can’t fail to notice Mr Tinubu’s enormous mansion.

What’s being claimed is that he has benefitted from the state since leaving office as governor in 2007. He told me that those allegations are unproven.

“It’s envy,” is his assessment.

Insecurity across Nigeria is also a key issue. Does he have the solution?

“The West is yet to feel comfortable enough with a Buhari administration to sell us the arms and technology necessary. We have to look at alternatives – the mass recruitment of individuals in the volunteer army to really clean up the system.”

By that he means beefed-up military and security forces.

And if he had to choose one of the two other main candidates, former Vice-President Atiku Abubakar, who is standing for the main opposition Peoples Democratic Party (PDP), and the Labour Party’s Peter Obi, popular among young Nigerians, who would it be?

He makes it plain – he feels neither are up to the job.

“They are not as competent as any other person out there. They have no track record. None of them is qualified except me.”

The final decision, of course, will be up to Nigerians.

You can watch Peter Okwoche’s full interview with Bola Tinubu on Focus on Africa at 17.30 GMT on BBC World News

DISCLAIMER: The Views, Comments, Opinions, Contributions and Statements made by Readers and Contributors on this platform do not necessarily represent the views or policy of Multimedia Group Limited.
Tags:
Bola Tinubu
Nigeria