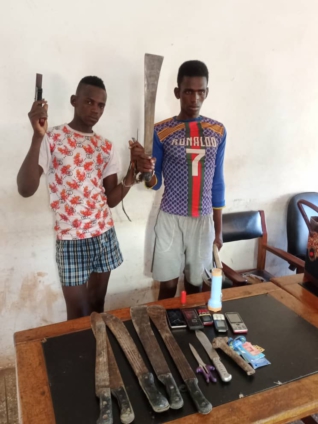 The Savelugu Police Command has picked up two suspected armed robbers at Pigu, a community in the Savelugu Municipality of the Northern Region.

The two, Issaka Dawuda, 25, and Belco Bukari, 26, were first detained at the Palace of the Pigu Chief but after receiving a tip-off, the Police rushed to the Palace to retrieve the two Burkinabe nationals who reside in the area.

According to AdomNews’ Illiasu Abdul Rauf Dabre, the Chief refused to hand over the culprits but finally gave in after the Police threatened to call for reinforcement.

Municipal Police Commander, DSP Twumasi Ankrah disclosed that the security personnel retrieved some weapons after one of the suspect, Belco Bukari took the police to their hideout during their investigation.

One motorbike with its relevant document is in the custody of the Savelegu Police Command.

The two suspects are expected to appear before a court of law in Tamale, Friday, after admitting to being robbers.