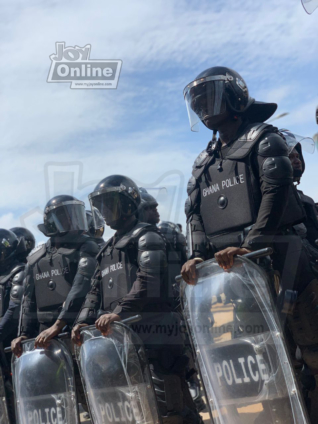 The Ashanti Regional Police Command has rescued a woman allegedly kidnapped by armed robbers who robbed her family apartment at Abuakwa Asenemaso.

Police say the robbers, wielding machetes attacked two families in a house at about 1:00am on Tuesday and robbed them of some valuables. They also captured the 34-year-old woman.

The robbers earlier called the woman’s family to demand a GHC20,000 ransom.

It took the swift intervention of the Police intelligence Unit to rescue the woman who was kept in an uncompleted building at Mmetiam near Abuakwa in the Atwima Nwabiagya municipality.

The intelligence report came at the time Police officers were closing in on the suspects.

The 34-year-old woman, who is an Accountant at the Mpasatia Senior High School, is currently receiving healthcare at the Abuakwa Polyclinic.

Ecstatic family members could not hide their joy when they reunited with their relative.