Process for choosing next NPP leader should be transparent and fair – Akufo-Addo - MyJoyOnline.com 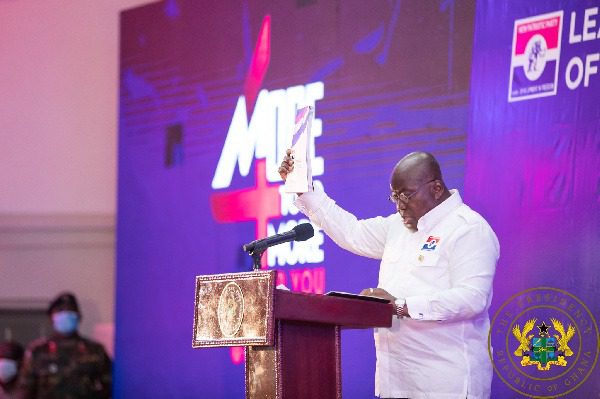 President Nana Akufo-Addo has charged the leadership of the New Patriotic Party (NPP) to ensure that processes leading to the selection of a flagbearer for the 2024 election are free, fair and transparent.

He told Kwami Sefa Kayi on Accra-based Peace FM on Thursday that the governing party has the duty of ensuring that it conducts itself responsibly in all activities.

Acknowledging that there are cracks in the party, President Akufo-Addo said the NPP’s next presidential candidate must be one that would unite all.

“I am hopeful that a level-playing field that allows us to elect our next presidential candidate will also bring us a candidate who can unite our party,” Akufo-Addo said at the start of his Greater Accra regional tour.

As the party leader, Akufo-Addo said he has made a personal commitment to ensure that the NPP presents a formidable front for the 2024 polls.

Some of his appointees have been named as being interested in succeeding him.

They include the Vice President, Dr Mahamudu Bawumia; Trade Minister, Alan Kyeremanteng; and the Minister of Food and Agriculture, Dr Owusu Afriyie Akoto.

Although concerns have been expressed that the ambitions of these persons may be affecting their national duties, the President said that he has no evidence of such.

That notwithstanding, Akufo-Addo said that “he would have to act” if something of that nature happens.

“I have no evidence that their ambition is interfering with the work they are doing. On the contrary, I continue to see in the cabinet, people who are working strongly for their people,” he said.