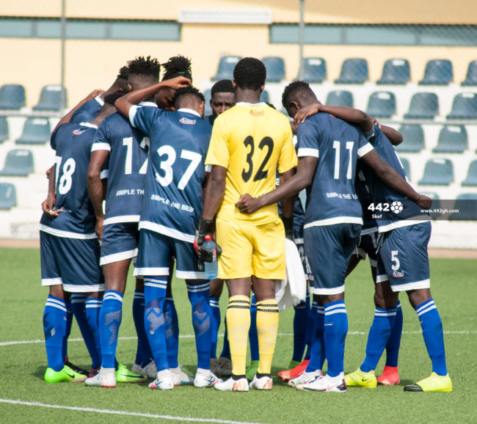 The pain of relegation run deep in the veins of those associated with Liberty Professionals, as 22 years of toil and a club theme deeply connected to the Ghana Premier League, were brought to a disappointing end after a draw with King Faisal. It was confirmation that the Scientific Soccer Lads were headed back into Division One and it was a story too bitter to behold.

“It was a difficult thing to take because for a club that has been in the Ghanaian top flight for well over 20 years, since 1997, you knew it was always going to be difficult tasting relegation for the first time in the club’s history. It took management a while to come to terms with the fact that the club has been relegated to Division One.

“We had a very short preseason (for Division One) because we didn’t start early basically because of the shock. We didn’t get over the shock very early,” Yusif Alhassan Uthman, an administrator at the club narrated to JoySports.

Liberty had risen through the ranks since gaining qualification in 1997, their first attempt. The club never managed to win a title even once, but their relationship with the top flight was one which went beyond silverware, as they were the center for excitement with an array of talents which left the franchise dazed.

And it was a relationship they sought to preserve as the 2020/21 season wore on, but try as they might, destiny seemed to have already been locked in place.

“For anybody who has followed Liberty Professionals quite closely, they’ll realize that in the second round of our last season in the Premier League,” Uthman narrated. “We took a lot of short-term measures to ensure the club stays up, signed a lot of players on short-term deals just so the club can stay up and we take it on from there.”

All the scheming failed to materialize and Liberty’s fear became a reality – one they refused to believe. But it finally set in and fate was accepted, as the club decided to realign themselves and face their new fortunes. Change became a necessity, alongside the decision to start all over.

“A lot of thinking went into the rebuilding process. Preparing for Division One, we needed to do a complete revamp of the playing body and technical team, because if you remember it was Sellas Tetteh who was at the helm of affairs at the second round of the season before demotion.

“We brought in a coach who we felt will fall in line with the sort of thing we wanted to do, a coach who is more into youth development as opposed to someone who is a known face to the top tiers of Ghana football.” Uthman said to JoySports.

In the midst of all the change, certain things could however not be touched. The pedigree of their progressive club policy was too strong to be forgotten, and five players were brought in from the academy to support the push for a return.

“Five of us were promoted[to the first team],” Phillip Tetteh, a youth graduate recollected. “The aim is to bring back Liberty to the Premier League [and] it is very, very difficult because some teams like Hearts of Lions and Tema Youth have been here for I think five years. So it’s difficult to beat them, they know how to play.”

A slow start to new life was characterized by the club failing to win any of their opening four games, and though it was probably too early to give up, life in the rat race of the Division One seemed to be heavily stack against the odds of a club boasting of a long-standing tie with the top division.

“Division One has been very tough, things are very difficult, more-so when they know you just came and want to go back. Every team which comes our way wants to beat Liberty and make a name for itself,” head coach, Desmond Issah Botchwey.

“I remember in this game where we scored a goal and went to jubilate. The referee and his assistants run to the center line as if to restart the match. We came back after the celebration for restart, but the referee just went back and said the goal was offside. He didn’t say it right on the spot – I don’t know whether he has his on VAR but he just said it is offside without any explanation or reason.”

Nonetheless, Liberty fought on to stay high up the table, and a test of their character was brought to light with a hard-fought victory away to rivals, Tema Youth. The result propelled the Dansoman-based outfit right to the top of the table and perhaps, they were left clouded in all the excitement.

Defeat to Golden Kicks only a week later left the Scientific Soccer Lads behind Tema Youth again, as their rivals strolled to victory over Kwaebibirem. The tug-of-war for top spot was far from over though.

Consistent victories and a good run of form were only enough to maintain Liberty in second place, ahead of a crucial final day away to Akim Tafo Susubiribi, where victory will secure a return to the Premier League after 326 days away.

Even so, their hope for qualification is left hinging on the result down south, where third placed Tema Youth face off with leaders, Kotoku Royals. Only three points separate the three clubs and it is for this reason excitement in Liberty is stifled.

“Nobody is taking things lightly at all. All hands are on deck and we are trying to see what we have in this last match because we need to win but it won’t happen just like that. Going away to win is not easy because they are playing at home and have to satisfy their fans. But we want to win and we’ll do our possible best.” Botchwey said.

“We the players are taking it as a must-win game,” Kwame told JoySports. “We have told ourselves that let’s just win and see what happens, because you’ll never know in football. The club have asked us not to give up and to fight. We are ready.”

George Ansong, who leads Liberty’s scoring charts, remembers well the emotions which engulfed him after suffering relegation, and he hopes to shelve it for good.

“We are hoping the other centers favour us but [qualification] will give me so much satisfaction. I was on the field when we were relegated and having another feeling qualifying back to the Premier League will be so amazing to me.”

Hope and anxiety amongst staff and players is replicated by fans’ prayers and and a plea for divine intervention, as they are clouded in the imagination of re-embracing Premier League football.

“We are praying they come back to the Premier League because we miss them so much. They make the league attractive so I wish them all the best and hope they win this last game.”

“I will be so excited if they qualify to the Premier League. I will come to the park, watch the games and be happy.”

“If Liberty qualify, I will be so happy. I support the club, there’s no other club here, just Liberty so I am praying they qualify. I want them to come so we can fix our park.”

“If Liberty return to the Premiership, Dansoman will become very exciting. They playing in the Premier League takes away our worry. We get excited when watching football, there is nothing else to do here in Dansoman.”