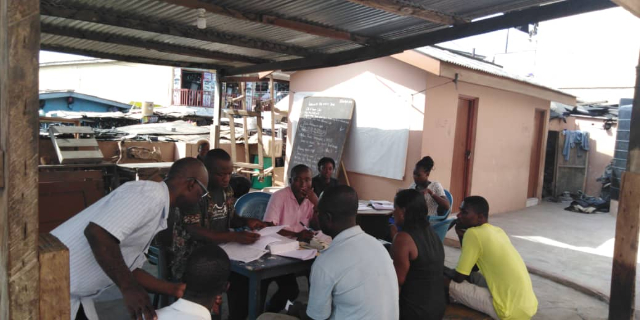 Mass registration for the National ID cards has taken off in the Greater Accra region, but not without challenges.

The exercise began Monday morning and is expected to continue until July 6 after which it will be extended to other regions.

But Day 1 of the exercise has been fraught with challenges relating to requirements for the exercise.

Ken Attafuah is the Executive Director of the NIA

A visit by JoyNews’ Nancy Emefa Dzradosi to a registration centre at Abossey Okai in Accra revealed that many residents do not have some salient documents being demanded by the National Identification Authority.

“I don’t have a birth certificate so I have been turned away,” one resident lamented.

Another resident who spoke said he does not have a digital address; which is also a requirement for the National ID (Ghana card).

We want them to revise their requirements and accept other documents like other national IDs, a disappointed resident said in Twi.

Emefa however, reported that some residents have gone through the process successfully. One man did not have any documents but he got some guarantors as required by the NIA, she reported.

The opposition National Democratic Congress (NDC) had raised concerns about the requirement in 2018.

The NIA however, stood its grounds, causing NDC MPs to boycott of the exercise when it was carried out in Parliament.

The Ghana card is part of President Nana Addo Dankwa Akufo-Addo’s promise to digitise the economy.

It is expected that the card will serve as a central database leading to the roping- in of the informal sector into the tax net.

Akufo-Addo promised to ensure the cards are issued when he was campaigning to become President in 2016.

DISCLAIMER: The Views, Comments, Opinions, Contributions and Statements made by Readers and Contributors on this platform do not necessarily represent the views or policy of Multimedia Group Limited.
Tags:
Abossey Okai
Ghana Card Registration
National Identification Authority