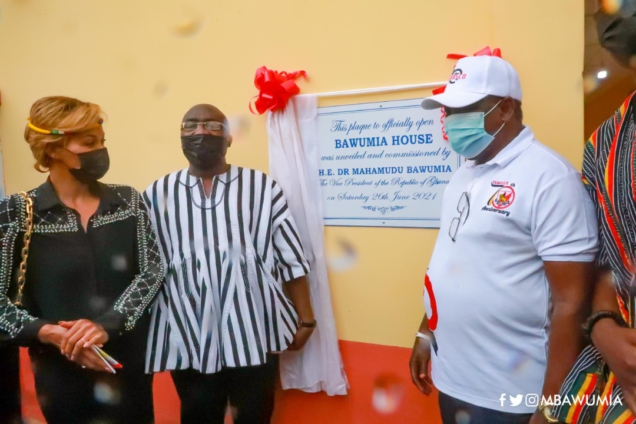 The Board of Governors of Tamale Senior High School has named a newly constructed dormitory block after the Vice President, Dr. Mahamudu Bawumia.

The dormitory, named Bawumia House, is in recognition of Dr. Bawumia’s enormous contributions to the development of the school.

Speaking at the launch of the school’s 70th anniversary in Tamale on Saturday, Dr. Bawumia expressed deep appreciation to the school for the honour, and also dedicated the glory to all past students of the school.

“I must thank the Board of Governors and the school for the honour done me to name a house after me, Bawumia House,” Dr. Bawumia, himself a former student, said.

He added: “I am so humbled. I just never dreamed of this. So I accept the honour on behalf of all old Tamascans. It is not just for me, it is for all old Tamascans who have contributed in diverse ways towards this great school of ours.”

Dr. Bawumia’s support and contribution to his former school has been enormous, and naming a dormitary after him highlights the depth of the school’s appreciation.

The Vice President is said to have made substantial monetary and material contribution to the school towards several infrastructure projects, and his support dates back to his days as a private citizen.

Just as he does for other schools across the country, Dr. Bawumia has facilitated the provision of government and privately funded facilities for the school, including a 600-bed MTN-funded girls dormitory block, which he commissioned on Saturday, as part of the programme to launch the school’s 70th anniversary.

DISCLAIMER: The Views, Comments, Opinions, Contributions and Statements made by Readers and Contributors on this platform do not necessarily represent the views or policy of Multimedia Group Limited.
Tags:
Bawumia House
Dr. Mahamudu Bawumia
Tamale Senior High school
Vice President