The law banning chiefs from engaging in politics is unjust – Okyenhene - MyJoyOnline.com

The law banning chiefs from engaging in politics is unjust – Okyenhene 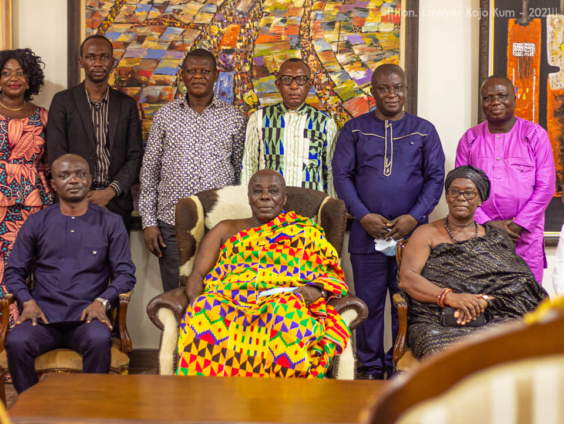 The Okyenhene, Osagyefuo Amoatia Ofori Panin has called for a review of the law barring chiefs and traditional leaders from commenting on political issues.

According to the Okyenhene, the situation is unjust since it is preventing chiefs from advising their subjects on political policies that may or may not be beneficial to their various traditional areas.

He insisted that the rule infringes on the democratic rights of traditional leaders and also limits the crucial role chiefs play in development.

The Okyenhene made this declaration when the Chieftaincy and Religious Minister, Ebenezer Kojo Kum paid a courtesy call on him on Tuesday.

“I find it very unfair that chiefs cannot share their opinion on a policy that may be directed towards a particular political party. We have something called ‘unjust law’ and when there is such a law you can protest and speak. So to say that Nananom cannot comment on policies is very unjust and so we have to look at that.

“This is because you are taking someone’s democratic constitutional rights from him or her that they can’t participate in the laws that governs the country because of his status,” he said.

Still focusing on the law, the Okyenhene also raised concern about chief’s inability to contest for political offices.

He questioned why a chief must first abdicate his position before participating in a parliamentary elections.

Citing lawyers, surveyors and other professional workers who do not have to renounce or resign from their expertise fields, the Okyenhene inquired why chiefs cannot do same.

“When they say civil servants must resign from their post before vying for a position, it is understandable because government is paying them. But that is not the same for chiefs; we are not on their [government] pay role. So why must we be barred from vying from political office because we have inherited our family’s properties, that is so bad and unjust,” he stated.

The Chieftaincy Minister, on his part, informed the King of Akyem Abuakwa that a national dialogue will be organised on the matter.

He indicated that when deliberation on the issue is finalized, processes will be initiated to review the law.

“The law banning chiefs from engaging in politics is an entrenched law, so if we need to revise it, then we have to hold a referendum. So as you have said, we will start a national dialogue [and take it from there].”