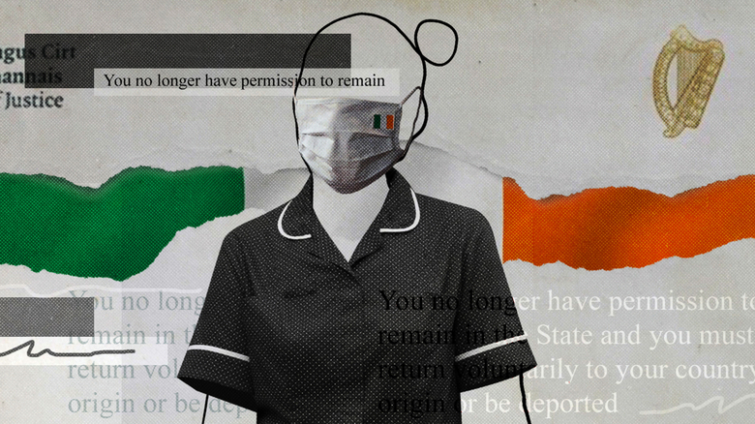 Lily was taking her lunch break at the Dublin nursing home where she works when a friend called with the news that an official-looking letter had arrived for her.

She asked the friend to open it and read it aloud.

“You no longer have permission to remain in the State and you must now return voluntarily to your country of origin or be deported,” the letter, from Ireland’s Department of Justice and Equality said. It told her she had five days to inform the authorities of her decision.

A flood of emotions rushed up at her, through the layers of her protective equipment. Lily said she wanted to cry, but forced the tears back down inside.

“I had to stay strong for the residents,” she said. “So, I put on a smile but deep down it was incredibly painful.”

Lily — whose name has been changed for her safety — said she fled anti-LGBTQ persecution in her native Zimbabwe and came to Ireland in 2016.

She wanted to help others, so studied to qualify as a healthcare assistant; she landed a job as a care worker at a nursing home last year, and hopes to study for her nursing degree in future.

She has worked at the care home throughout the coronavirus pandemic, taking only three weeks off when she contracted the virus herself in April.

Near the beginning of the pandemic, the Irish Nurses and Midwives Organization reported that Ireland had the highest rate of Covid-19 infection among healthcare workers anywhere in Europe.

Once she had recovered, Lily returned to work. In the months that followed, she said she watched as the disease took the lives of some of the elderly residents she had cared for.

“There were so many people dying. It was unbearable,” she said.

Now, with deportation looming, Lily feels she’s facing something akin to her own death sentence.

“They are saying the frontline workers are the heroes … but behind closed doors they are chasing us away and kicking us back [to the countries we fled],” she said.

The Department of Justice’s letter to Lily — issued three weeks before the country entered a second national lockdown to curb a spike in infections and fatalities from the virus — also rendered Lily’s work permit invalid with immediate effect, though she has continued working.

Healthcare worker Constance — whose name has also been changed, as she fears speaking out could affect her case — works in a different nursing home, but faces a similar situation.

In 2019, Constance’s application to remain in Ireland, again based on the anti-LGBTQ discrimination she says she faced in Zimbabwe, was rejected. She said she was told her story didn’t stack up because she didn’t “seem bisexual.”

Ireland’s Department of Justice told CNN in a statement that it was not their policy to comment on specific immigration cases.

In another statement, the department said it follows the UNHCR guidance in “relation to claims for international protection based on sexual orientation and/or gender identity,” and that training for caseworkers and interviewers “is very comprehensive and is conducted in conjunction with the UNHCR.”

The department said each case was examined on its individual merits, with decisions made as quickly as possible.

“This ensures that those who are found to be in need of our protection can receive it quickly and begin rebuilding their lives here with a sense of safety and security,” it said.

After her application for permission to remain in Ireland was rejected, Constance appealed on “humanitarian grounds,” a process which takes into account a person’s character, their conduct and the nature of their connection to the State.

Given her longstanding dedication to Ireland’s most vulnerable people — both before and during the pandemic — and a glowing reference from her employer, who said her work was essential, Constance said had felt hopeful that her appeal would succeed.

Instead, she received a letter on October 28, calling for her deportation. She said she had been left heartbroken, her memories of Ireland’s public show of solidarity for healthcare workers earlier in the pandemic now faded and tarnished.

Speaking in the Irish parliament in May, the then Minister for Health, Simon Harris, acknowledged the contributions of some 160 migrant healthcare workers living in “direct provision,” the country’s controversial system for asylum seekers.

Harris said he was extending a “céad míle fáilte” — meaning “a hundred thousand welcomes” — to those migrant healthcare workers.

But for those facing deportation, like Lily and Constance, his welcome rings hollow.

In its August report: “Powerless: Experiences of Direct Provision During the Covid-19 Pandemic,” the Irish Refugee Council called on the government to give migrant healthcare workers and others working in the healthcare sector “permission to remain” as a “recognition of their work and contribution to Irish society.”

CNN has asked the Department of Justice and Equality how many of the estimated 160 migrants working in the country’s healthcare sector have had their asylum applications turned down since the start of the pandemic.

That information hasn’t yet been made available, but the fact that at least two healthcare workers have been threatened with deportation in the middle of a second national lockdown is a concern to migrant rights groups.

The Department of Justice told CNN the “time taken for relevant voluntary return arrangements to be made will take into account all factors, including Covid-19 restrictions and limitations to travel this has created.”

It said the Minister for Justice, Helen McEntee, has asked her officials to “review the issuing of these letters” for the duration of the level 5 restrictions, which are currently scheduled to end on December 1.

‘Lives on the line’

Bulelani Mfaco, a spokesperson for the Movement of Asylum Seekers in Ireland (MASI) told CNN that the Department of Justice has long been “hostile to people from migrant backgrounds,” but he hadn’t expected them to “go to such lows” in the middle of a pandemic.

Mfaco added that many other migrants were working in essential roles during the pandemic — in retail, as guards and as cleaners — doing all they can to help keep the country afloat.

CNN has spoken with two of those essential workers — one in the food service industry, and another who works as a security guard at a care center — who have both received negative decision letters in recent weeks.

In May, the Movement of Asylum Seekers called on the government to recognize the contributions of such essential workers, saying that the Department of Justice “can, should, and must regularize undocumented people and offer long term residency to all non-EU/EEA nationals in the State during this pandemic irrespective of current immigration status.”

Now, that message is being echoed in the halls of the Irish parliament, with a handful of lawmakers urging the Minister for Justice to reconsider her stance.

Last week, in an impassioned speech, Senator Eileen Flynn said it was “absolutely ridiculous” that healthcare workers were facing deportation, in the middle of a pandemic.

“These women have put their lives on the line in this country. If that does not show determination and commitment to this country, what does?…Those who live here, belong here,” she said.

Both Lily and Constance say that they are currently working with their solicitors to appeal against the threat of deportation.

Constance said her employer is aware of her case and continues to support her work at the home.

Lily said she has not shared the news with her managers, despite a constant fear that the authorities could come and pick her up at any time.

The women insist they will keep working. They must, they say, because the country needs them.