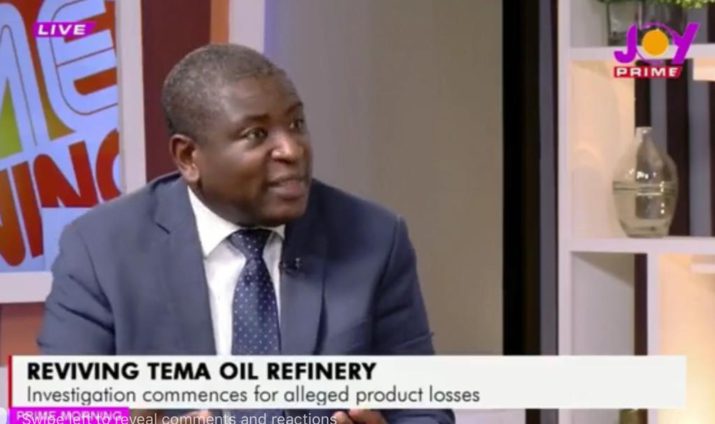 Executive Director of the Institute for Energy Policy and Research, Kwadwo Poku, says the Interim Management Committee of the Tema Oil Refinery (TOR IMC) has not lived up to expectations since it was constituted some four months ago.

He argues that the Committee should have been able to find out the problems TOR is facing in order to suggest appropriate measures to revive the company.

“I don’t expect you to come and tell me that you’ve interdicted people and begun investigations after four (4) months of being there. My concern is that they are sleeping on the job.

In an interview with Benjamin Akakpo on Prime Morning on the Joy Prime channel, Kwadwo Poku called on the Energy Minister and the President to set standards for the IMC so that proper monitoring could be done.

He indicated that it is inappropriate for the Tema Oil Refinery to keep losing money when it suffers to generate revenue.

“I don’t have a problem with the work they are doing. Tema Oil Refinery must work again, somebody can’t sit there and in four months, just come out and say ‘I’m beginning an investigation into theft.

“Their interim nature causes a problem. In the last four months, what we have heard, even from the report they put out, tells us that they’ve been there for four months and they’ve not done anything,” he bemoaned.

The Interim Management Committee of the Tema Oil Refinery (TOR) interdicted some staff for their involvement in the alleged theft of ¢10.4 million worth of cables.

Describing it as unacceptable product losses, TOR said the thievery was discovered as a result of Technical and Human Resource audits.

The Interim Management explained that the affected staff “who hold various positions of responsibility and accountability concerning the transfer of products, have been queried and interdicted pending the outcome of investigations.”

The Committee explained that it has instituted a zero-tolerance culture for unacceptable product losses.