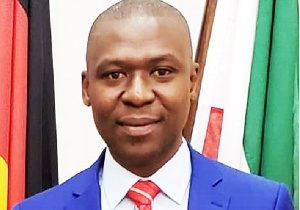 Two Minority Members of Parliament in Cape Coast have rejected the confirmation of MCE nominee, Ernest Arthur which took place on Sunday, October 17.

Mr. Arthur failed to secure the two-thirds votes on two occasions but was renominated by the president.

The third round of voting was scheduled for Sunday, October 17, at the Centre for National Culture in Cape Coast but it was not without controversies.

Sixty-Three members of the Cape Coast Assembly were present and voted, followed by a confusion after the sorting of the ballot papers.

The confusion began after an unidentified person stormed the counting arena and took away some of the ballot papers amidst the controversies.

The MP for Cape Coast South, George Kweku Ricketts Hagan, who had walked up to the counting arena to observe the process, was fiercely resisted and had to walk away together with his counterpart from the Cape Coast North, Dr. Kwamena Mintah Nyarku.

The two, together with some assembly members perceived to be sympathizers of the NDC held a news conference rejecting the confirmation of the president’s nominee, Ernest Arthur.

Mr. Hagan intimated that, Cape Coast has been visited with thuggery and the earlier something is done to deal with the thuggery, the better it would be for the people of the city.

He stated, “Cape Coast by nature is a peaceful town with peaceful people, we cannot have this ‘thug’ here running the show and doing criminal things to stay. I am alerting the people of Cape Coast the danger this ‘thug,’ Ernest Arthur, presents.”

The MP for Cape Coast South continued, “And if care is not taken and this issue is not addressed and a re-election or cancellation of the election does not happen, Osabarima, this man presents a danger to Cape Coast.”

His counterpart, Dr. Kwamena Mintah Nyarku, the MP for Cape Coast North, added that should they cancel the election and a new one is scheduled, under the same manner, they would advise themselves.

“We were happy about the presence of Osabarima (The Paramount Chief of Cape Coast). We thought it was going to change things but his presence did not make the people conform to the procedure. And I am disappointed.”

Notwithstanding the sentiments, the EC declared Mr. Ernest Arthur confirmed after he polled 45 out of the 63 votes cast. The confirmed MCE was subsequently sworn into office by a judge at a brief ceremony at the Centre for National Culture.