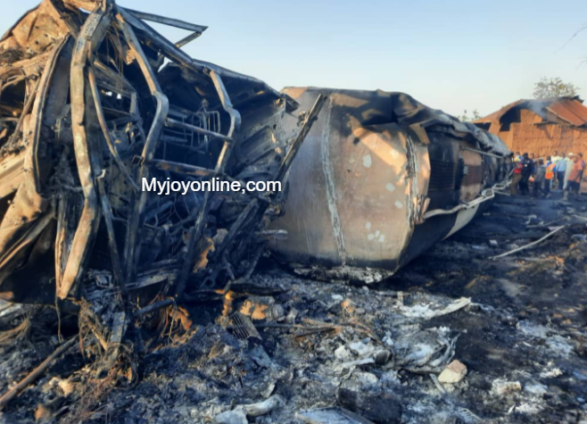 Preliminary investigations carried out by the Police have revealed that the fuel tanker explosion at Onyina Nofo Monday, May 24, was caused by unlawful parking by the driver of a Ford Transit vehicle.

According to him, despite investigations being at the preliminary stage, available evidence point to the unlawful conduct of the Ford driver.

“We are still on our investigations but what we found preliminarily, was that the Ford Transit driver, who was en route to Mankranso from Tepa, parked in the opposite lane. While he was about to move, the fuel tanker appeared from the Kumasi lane towards Tepa. Somehow, there was a crash.

“We can say with confidence that the fault came from the Ford Transit driver,” he said.

Parts of the Ashanti Region on May 24, were put in a state of mourning following the gruesome death of three individuals, including a 2-year-old child due to a fuel tanker explosion.

Residents who sustained various degrees of injury, were rushed to the hospital for treatment. But the majority of these victims, according to Nana Yaw Gyimah, have been discharged. Only a few are still receiving treatment.

Some three children who also went missing in search of a safe spot have been found and are currently with their respective families.

With about seven homes razed to the ground, most residents have been rendered homeless.