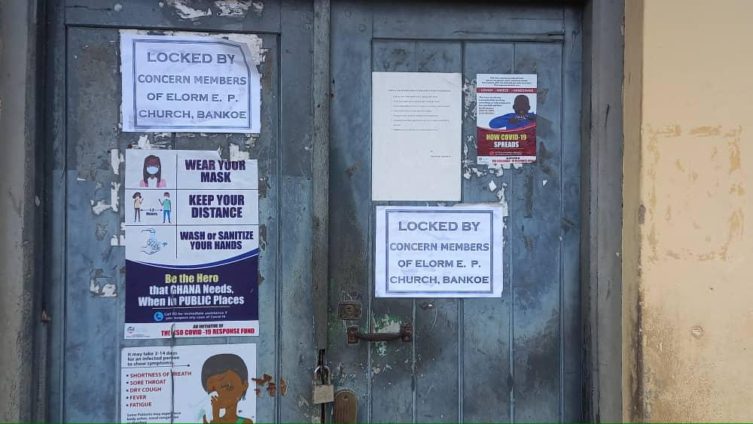 Some youths claiming to belong to the Ho Bankoe E. P Church, Sunday evening, locked up the temporary premises of the Volta Regional Library in Ho.

The office is contained in a structure that used to serve as a center for the Home Science Department of the Bankoe EP Junior High school.

r Bright Ofori, Deputy Regional Director of the Ghana Library Authority, told the Ghana News Agency (GNA) that at about 2000 hours on Sunday, two guys locked the security guard before he could come out of the building to question their intent.

Some workers outside the building had to be called upon to break in to let the guard out, and on Monday morning, discovered notices pasted to the doors, which read, “locked by concern members of Elorm EP Church, Bankoe”.

The Deputy Director said the incident was reported to the police, the Regional Coordinating Council, and the Executive Director of the Ghana Library Authority, but noted that the Church was yet to own up to the development.

“We are waiting to see if it was carried out by the Church,” he said, adding that the last of several letters by Management of the Church asking to take over the premises was in June 2021.

A new ultramodern state of the art library complex stands at about 90 per cent complete in Ho, and several appeals have been made to stakeholders to get it ready for use, as the current premises was not befitting.

Authorities of the E. P Church, denied a report by the GNA in January 2019, on an eviction notice reportedly served to the library authority.

Dr Archibald Yao Letsa, Volta Regional Minister, in April 2017, toured the new library complex, work on which had been ongoing for over a decade, and promised to ensure its completion.

Eighteen years down the line the project still stands undone and at the mercy of invading foliage.