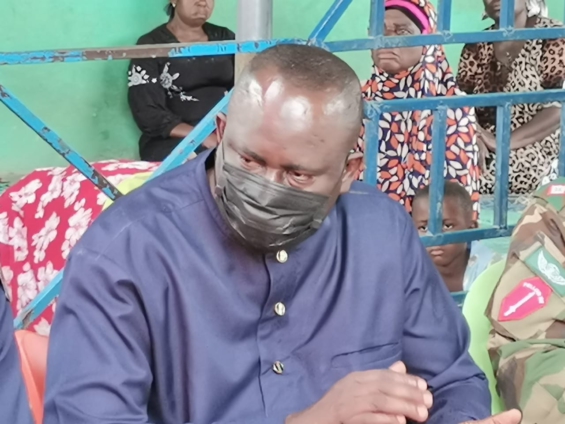 Upper West Regional Minister, Dr. Hafiz Bin Salih, has assured families of the two persons who died on March 17 as a result of alleged indiscriminate shooting of fairness, transparency and above all justice.

Dr. Bin Salih who was at the homes of the two victims of the dastardly act to commiserate  with them stated that the appropriate authorities have kick started investigations which will be followed by prosecutions; warning that persons found culpable will not be shelved.

”We will do whatever we can in our position to ensure that justice is served. Nobody will be shelved and the right things will be done.

It’s been exactly a week since the suspected sixty one year old gunman, Alhaji Yunusah Abdul Rahman opened fire on a busy street at the outskirts of the Wa township, killing 2, injuring three persons and destroying the windscreen of an articulator trailer.

However, the families of the affected are still grieving.

Dr Hafiz Bin Salih who was absent when the incident occurred, was deeply touched by the plight of the grieving families and on arrival in Wa joined them to mourn their relatives.

”What happened was unfortunate; it was not pleasant for me. The deceased who was known personal to me is a great loss. He is a friend and a brother and his demise is a great loss not only to me as a person but to the entire region,” he stated.

The pain of loss, therefore, hangs over the families considering the stature of the people in society.

A retired lecturer of Dr. Hilla Limann Technical University and father of three, Stephan Langton Mane who is seen as a role model due to the sea of graduates he  churned out, the void left according to family spokesperson, Saman Chrisantis is irreplaceable.

”We are shocked to our bones, it is difficult, it is not easy. The position of our brother, our father in our family to the entire village (Iizza) is something irreplaceable”

”We at a point console ourselves with the words of God; God has given, God has taken. Even with that we still asked questions on it, is that the way God should take,” he quizzed.

“We want to tell you that we don’t need any other thing than justice and we will want this case sped up. We don’t want the go and come, go and come, it loses confidence in people,” he pleaded.

The daylight laconic bravery displayed by the suspected killer is arguably unprecedented in the region’s history.

His second victim in the alleged indiscriminate shooting, 45 year old father of 10, Iddrisu Alhassan died less than 24 hours at the Upper West Regional Hospital after he sustained gunshot wounds.

He was first taken to the Wa Municipal Hospital, rushed to the hospital’s theatre to remove pellets from his body and also prevent in-bleeding.

He survived the surgery but needed further attention in an intensive care unit which was not available at the hospital.

He was then rolled out of the hospital to the Regional Hospital where he passed on.

His family members at Bamahu are in a pensive mood. They were however grateful for the Minister’s visit.

“You have really shown that you are our brother, father and the leader of the region. You have really wiped away our tears,” the deceased’s junior brother, Alhassan Dauda, told the Minister.

“The only thing we can do for our departed brother is to pray for him but the rest is left on to you to do the needful,” he added.

The horror of the indiscriminate shooting has touched every corner of the region but in Kabenya, a suburb of Wa, they carry the additional scar that the man accused of the shooting hails from there.