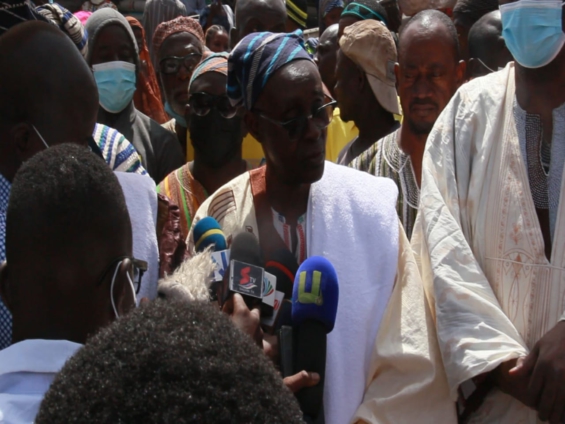 The Overlord of the Dagbon Kingdom Yaa Naa Abukari has commiserated with victims of last Saturday’s fire disaster at the Aboabo market in Tamale.

The team headed by the Nanton Naa was to ascertain the cause of the fire and to meet with various stakeholders on how to prevent such occurrence in future.

Speaking to the media, the Spokesperson of the Yaa Naa, Zangbalin lana Dr. Jacob Mahama said the loss is not just a loss to the traders but a loss to Dagbon, the Northern Region and to the country as a whole.

He said any reduction in the wealth of the people is a loss to the area.

Dr Mahama said there was the need for a collaborative effort by the various stakeholders like the Fire Service, the Ghana Water Company and the Assembly to address the lapses so that the area does not witness such occurrence again.

“The Overlord is much concerned about the extent of the damage and to appeal to the authorities to see what can be done to reduce the pain,” the Spokesperson said.

He called for the restructuring of the market by creating space, rewiring of the place and the opening of water hydrants in the market.

“The Ghana Water Company should open up the water hydrants or find an alternative. We all saw it when they came here, there was no water. Private people had to come and provide water to contain the fire.

“We think in situations like this it is not only for the Fire Service who should work but others especially those providing the water. So the Overlord is therefore appealing to Government and all stakeholders to come together to prevent such occurrences in future,” he said

The Mayor of Tamale, Sule Salifu who responded to the delegation said he is ready to support the Chiefs to ensure there is harmony in the society.

He said the Assembly has taken note of the lack of access roads into the market which made it difficult for the fire crew to move freely.

The Mayor said he has instructed a taskforce to embark on a serious demolition exercise to pave way for the free movement of vehicles.

“When we got here this morning we realised that there was no free movement of the Fire Service into the market so I have instructed the taskforce to remove all the containers blocking the way and I will come back here at 5 to inspect it because we do not know what will happen tomorrow,” the Mayor said.

He added that he has asked the Ghana Fire Service and the Ghana Water Company to collaborate to ensure there are water hydrants for usage.

DISCLAIMER: The Views, Comments, Opinions, Contributions and Statements made by Readers and Contributors on this platform do not necessarily represent the views or policy of Multimedia Group Limited.
Tags:
Aboabo market fire
Tamale
Yaa Naa Abukari