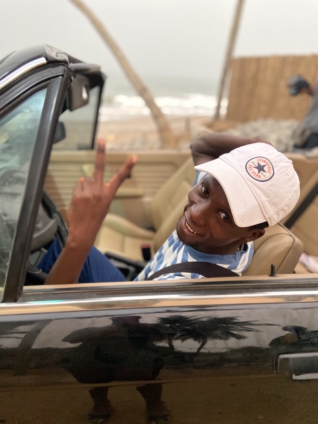 Clothing brand owner of Exclamation, Augustus Edgar Quartey, is moving from a thrift shop to a clothing brand as his love for fashion and style is aimed at influencing the fashion sense of young people in Ghana and beyond through his clothing brand.

Edgar, an alumnus of Mfantsipim School, started Exklamation in 2018 as a thrift shop alongside his second business as a filmmaker. However, in the space of two years, he is in the process of transitioning his business from a thrift shop to a clothing brand.

He has so far released two main products – Prof K’s and Djembes – and will release more this year.

Exklamation’s Prof K is a body harness bag, named after his friend.

Djembes are cargo pants also named after another friend.

The name of his clothing brand was inspired by an interesting incident that happened when he was in primary school.
According to Edgar, he wore a perfume which his mother owned to school. His teachers liked the fragrance of the perfume and asked him to find out its name so they can also purchase it. Discovering the name of the perfume, however, ended up meaning a lot to him.

“The name of the perfume had ‘exclamation’ attached to it. The word ‘exclamation’ became so special to me… So I checked the dictionary meaning for it and the meaning made sense to me. So I always wanted to name something I will do in the future ‘exclamation’, and I think it really connects with making clothes so I decided to name my clothing brand ‘Exklamation’.”

As someone who wants to influence the fashion sense of young people, Edgar, in promoting his clothing brand, has featured influential people who appeal to the youth in Ghana. He has featured RJZ, Kiddblack, Tulenkey, Dancegod Lloyd, Incredible Zigi and others.

“The clothing line is for young people so I like to feature people who appeal to the youth… and I will be featuring more people who have that college/high school vibe and are very influential and I just want to put out quality and influence the style of dressing among young people and old people who are young at heart,” he said.

Edgar is set to release a documentary this year titled Self Made, which will tell the story of Exklamation.
“It’s about me and Exklamation. I’m launching Exklamation this year… so all my friends and everybody I’ve worked with will talk about me and my journey,” he stated.

“I’m also trying to launch my store this year. I also want to open more stores in every corner of the country in the near future so that my clothes will be accessible to every young person,” Edgar added.

His other job: Filmmaking

Aside from running a clothing brand, Edgar is also a filmmaker and the CEO of Exposure Network. His movies are mostly high school-themed and focus on young people.

He has joint-produced a couple of movies, but 14:32, which he collaborated with his friend Prof K to make, has earned four international awards. 14:32, a dance film released in 2015, features Deborah Vanessa, RJZ, Dancegod Lloyd, Incredible Zigi and others.

The movie also won the award for Best Trailer at the 2016 African Film Festival in the USA. He is also working on a new high school film which is scheduled for 2022.

DISCLAIMER: The Views, Comments, Opinions, Contributions and Statements made by Readers and Contributors on this platform do not necessarily represent the views or policy of Multimedia Group Limited.
Tags:
Clothing brand
Exclamation
Fashion
Ghanaian