2 perish in fire outbreak at Ahiatsikope 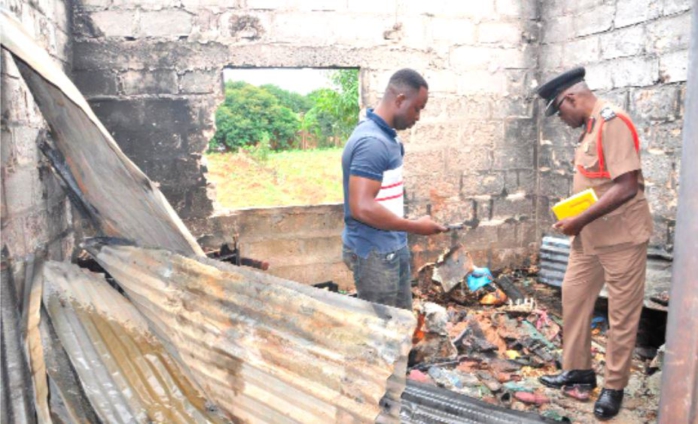 A 26-year-old woman at Ahiatsikope, near Dzodze in the Volta Region, Joyce Fianu, and her nine-year-old niece were burnt to death when fire gutted their house last Saturday.

The girl was identified as Christie Fianu.

Meanwhile, an elder sister of the deceased, Mavis Odor, who sustained serious burns was rushed to a health facility in Accra for treatment.

The midday blaze also destroyed the roof of the house and personal belongings of the family.

The Volta Regional Commander of the Ghana National Fire Service (GNFS), Joy Ayim Ameyibor, who conducted the Daily Graphic round the scene last Tuesday, said Joyce sold petroleum products in bottles and other containers which were kept in the kitchen.

He said on that ill-fated day, an ‘okada’ rider turned up in the house to buy fuel, while she was cooking on a gas cylinder.

As she served the customer, the bottle containing the petrol fell off her hand and the content erupted into flames, which spread rapidly to other parts of the house as result of the explosions from the other containers.

Ms Ameyibor, who is an Assistant Chief Fire Officer 1 (ACFO), said attempts by neighbours to put out the fire and rescue the victims proved futile.

At the time personnel of the GNFS from Dzodze arrived at the scene, the harm had already been caused, he explained.

According to him, the GNFS team saw the two dead bodies outside, close to the entrance of the house.

The bodies, he said, had been conveyed to the Saint Anthony Hospital in Dzodze, while the incident was being investigated.

ACFO Ameyibor expressed misgivings about the rising trend of the retail of fuel in containers in the region and said the practice posed a serious danger to households and the public.

“Under no circumstance should petrol be kept at home,” ACFO Ameyibor maintained.

He urged the assemblies to take a decisive step to halt what he described as the “micro-retailing of fuel” in homes and on mounted stands in the communities.

DISCLAIMER: The Views, Comments, Opinions, Contributions and Statements made by Readers and Contributors on this platform do not necessarily represent the views or policy of Multimedia Group Limited.
Tags:
Ahiatsikope
Dzodze
Fire Outbreak
Ghana National Fire Service (GNFS)