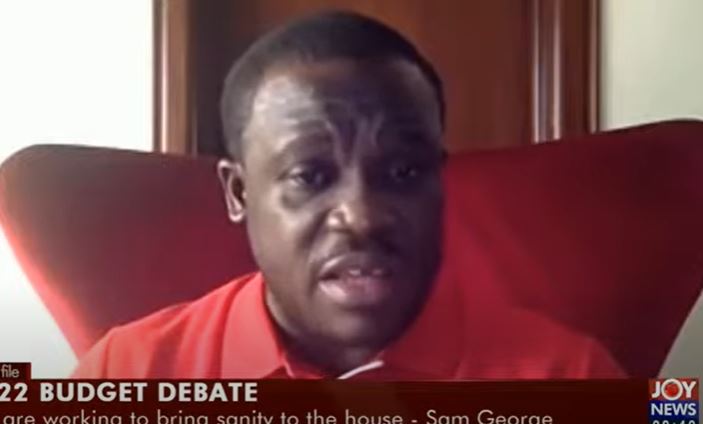 The Ningo Prampram MP, Samuel Nartey George, has accused the Finance Minister, Ken Ofori-Atta, of showing bad faith in his actions in Parliament over the 2022 budget.

Speaking in an interview on Joy News’ Newfile on Saturday, he explained that the Minority holds this view because the Minister failed to show up to Parliament after the budget reading even though debates were held.

He added that he only showed up at the last minute to appeal to the Speaker to engage the Minority MPs further on the 2022 Budget statement.

“We’ve been debating since Tuesday; he [Finance Minister] has never shown up in Parliament. When the question was about to be put at the last minute, the dying embers of the whole process then you show up and say you want more time and engage. Where have you been since Tuesday, Wednesday, Thursday, and even earlier in the day on Friday?” he quizzed.

Giving another reason for his point, he stated that the Finance Minister also failed to clearly state what he wanted to engage the Minority MPs on the record of Parliament.

“The Finance Minister had agreed in a prior meeting with Leadership and the Speaker to come and itemise what issues he wanted to engage the Minority on; however, he failed to do that,” he said.

“On the record, in that meeting, he agreed on the five issues he was going to come and tell the whole country and the world he was coming to engage us on. But on the record in Parliament, he failed to mention exactly what he wanted to engage,” he added.

This act from the Finance Minister, according to him, is not fair and did not show good faith in his doing.

This comes against the backdrop of the Minority rejecting the 2022 budget presented to Parliament by the Finance Minister.

They also highlighted five conditions under which it will approve the 2022 Budget presented to Parliament by the Finance Minister on Wednesday, November 17, 2021.

In a statement issued on Sunday, the Minority stressed that until Government includes, reviews and withdraws certain policies and initiatives in the 2022 Budget, it will not approve the financial estimates.

The Minority wants Government to withdraw the Agyapa deal and suspend the proposed 1.75% e-levy. The Minority has also advocated for proper reconstruction of paragraph 829 of the Aker Energy deal relating to GNPC’s acquisition of stake from Aker Energy and AGM Petroleum.

In addition to these, the Minority wants the Government to review the benchmark value for imports and provide for the Keta tidal waves disaster.

The Minority further noted that “Parliament has duly rejected the 2022 Budget. Until and unless the Government removes the draconian taxes contained in the rejected budget, the NDC Members of Parliament remain unable to support such policies.”

Meanwhile, the 2022 Budget Statement and Economic Policy of Government presented by the Finance Minister on November 17 has been approved by Parliament in the absence of the Minority Caucus, who declined to participate in the day’s business.

In their absence, Mr Ofori-Atta re-submitted a revised version of the 2022 Budget, unanimously approved by the Majority MPs, including the Speaker.