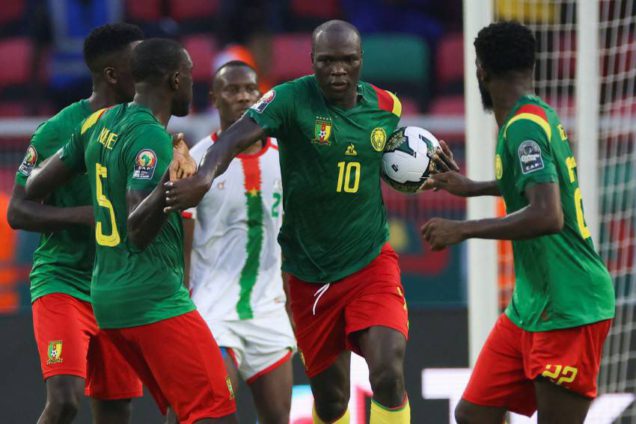 The 33rd edition of the Africa Cup of Nations got underway on Sunday, January 9 as host nation Cameroon had a winning start to the competition.

The Indomitable Lions, after going behind under 30 minutes fought hard enough to earn all three points as Vincent Aboubakar scored a brace from the penalty spot.

Burkina Faso had a shaky start to the game in opening 15 minutes as they allowed Cameroon too much spaces on the ball.

However, Cameroon were far convincing as they failed to take advantage the Stallions’ shaky start.

Burkina Faso’s first sight at goal saw them open the scoring with Gustavo Sangare firing the ball into the net from close range after an Andre Onana howler in the 24th minute of the game.

Having assisted Burkina Faso’s opener, skipper Bertrand Traore soon became a villain as a reckless challenge in the box on Frank-Andre Abguissa saw Cameroon being awarded a penalty, which was converted by Aboubakar.

The infringement, which was first waved away by the centre referee had to be brought back after an intervention by the VAR.

With just two minutes until the half-time break, Aboubakar made his as he only the first player after Flavio Amado and Seydou Keita to score a brace in an AFCON opener.

The Indomitable Lions captain scored from the spot again to give Cameroon a 2-1 lead before the break.

In terms of goals after the recess, both teams could do little to add to their strikes in the opening period of the game.

In the other group game, Yared Baye became the first player to see red card in the 2021 AFCON as 10-men Ethiopia were beaten by Cape Verde.

Julio Tavares scored the only goal of the game in stoppage time of the first-half to secure victory for the Blue Sharks.