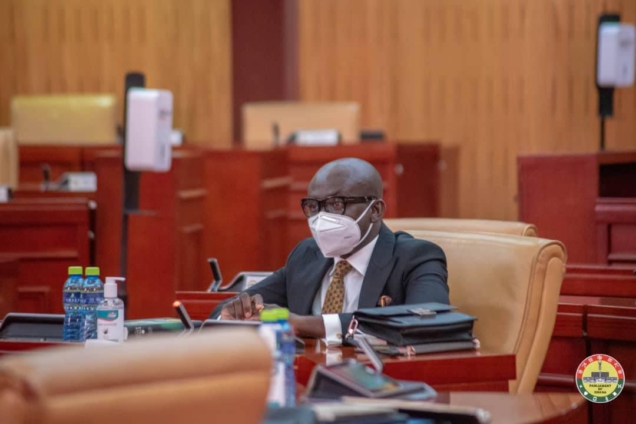 Godfred Yeboah Dame, once approved by Parliament, will become Ghana’s youngest ever Attorney-General and Minister of Justice at 41.

“Kwame Nkrumah’s Attorney-General Kwaw Swanzy was also 41 years but I beat him with just about two months,” the AG-designate told the committee.

“I may be young. I only have to act within the dictates of professionalism,” was Mr Dame’s response to a question posed by Ablekuma West MP Ursula Owusu-Ekuful about whether leading a department that will require him to supervise the work of many who are his seniors at the Bar will be a challenge.

He reminded the legislator, who is a lawyer as well, about the fact that serving from 2017 to 2020 as Deputy Attorney-General put him in a similar position but he was able to do the work required of him.

The period of his service saw the office come up for discussion due to some controversial matters. These matters were mainly the focus of his vetting as legislators demanded answers in 6hours and 23 minutes.

Questions were asked of him.

On the botched Agyapa Royalties agreement that sought to monetize Ghana’s gold royalties, former Special Prosecutor Martin Amidu had in a letter accused President Akufo-Addo of interest in his probe of the matter.

Mr Dame told the committee the former Special Prosecutor misinterpreted the President’s point about the need to give those named in his Corruption Risk Assessment report a fair hearing as interference.

“There is nothing on record showing a grant of hearing before the determination of the matter [Corruption Risk Assessment by the Special Prosecutor],” he stated.

The Special Prosecutor had questioned some of the agreements that were signed by the then-Deputy Minister of Finance Charles Adu Boahen saying he lacked capacity.

However, Mr. Dame disagrees. He insists deputy Ministers under Ghana’s constitution are permitted by law to execute functions assigned to them by the substantive Ministers.

He said if Mr. Adu Boahen was duly tasked by the Minister to execute those agreements, it will mean he had the legal mandate to do so.

Former Attorney-General Gloria Akuffo is on record to have raised red flags over portions of the deal and called for changes to be effected including the need for clear timelines.

The AG-designate told the Committee his former boss’ analysis cannot be construed as an opposition to the deal. He insists she backed the deal and raised appropriate concerns that needed to be executed. When pushed on whether he found anything in his analysis of the documents that give him a reason for concern, he responded that the transaction was okay.

“I with all respect cannot see any vitiating factor with regards to the transaction.”

On why some parts of the agreement did not obtain Parliamentary approval, the AG designate said this is not supported by the law as interpreted by the Supreme Court in the Balkan Energy case. Reading portions of the Judgement to back his view, he insisted the Supreme Court noted that requiring all agreements with international companies to obtain parliamentary approval will mean a simple purchase of airline tickets from a foreign entity will need such approval.

Mr. Dame was a member of the PPA Board under whose tenure, CEO A. B Adjei was busted for the sale of contracts. Questions were raised about the role played by the board in preventing this. He told the committee the issue proved by CHRAJ did not cite any member of the board for wrongdoing.

On the termination of the private sector participation in the management of ECG following the discovery that a demand guarantee had not been provided by PDS, the nominee said it was in the interest of the nation that the agreement was terminated since it means assets of the state were unsafe.

The AG’s office came under intense public criticism when a government White Paper rejected many key findings proposed by the commission that probed the Ayawaso West Wuogon bye-election violence.

Mr. Dame said the commission’s recommendations were in some instances contradictory.

According to him, the Constitution vests the President with the prerogative of rejecting or accepting either in whole or in part, the findings of a Commission of Inquiry.

He, however, committed to ensuring that compensations were paid to persons who were victims of the violence.

Admission into the Ghana School of Law remains a challenge, Mr, Dame further acknowledged but says a draft bill is expected to dramatically change the narrative.

“There has been a dramatic proposed change. So as to allow the professional law course to be run by faculties that run the law program,” he revealed.

He was questioned about the fact some residents of Santrokofi, Akpafu, Likpe and Lolobi (SALL) do not have representation in parliament. He assured the committee he will work on this but insisted the residents should have been allowed to vote in the Buem constituency.

Mr. Dame clashed at a point with minority leader Haruna Iddrisu over a law he insisted had been amended by Parliament.

Mr. Iddrisu suggested to Mr. Dame that a law he had quoted did not have clauses 1 and 2.

The Minority Leader subsequently conceded to AG designate on the matter.

DISCLAIMER: The Views, Comments, Opinions, Contributions and Statements made by Readers and Contributors on this platform do not necessarily represent the views or policy of Multimedia Group Limited.
Tags:
Appointments Committee
Attorney-General designate
Godfred Dame
Vetting