Akufo-Addo throws party for Lupita Nyong’o, Davido and other returnees 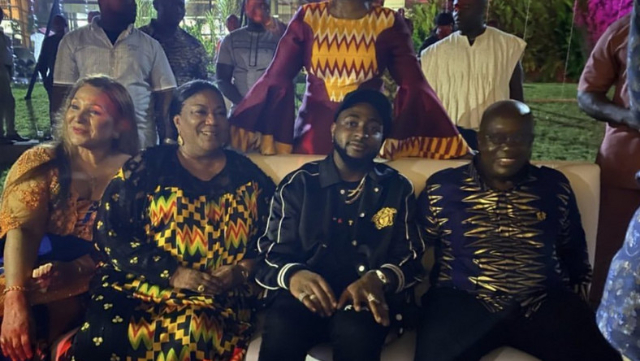 Before the end of 2019, President Akufo-Addo hosted some of the famous personalities that were still town at his Nima residence for a private party.

The party which came off on Monday was graced by Nigerian singer, Davido who kept the party alive with his hit songs.

The ‘Year of Return’ policy was introduced by government to encourage people from the diaspora to visit the country and connect with their origin.

Celebrities like Black Panther star Lupita Nyong’o were all present at the event.

American Businesswoman, Bazoma Saint John who was also present shared a photo with a captioned which reveals she was on her third trip to the country.

Look who i ran into at an amazing party at His Excellency Nana Akufo -Addo ”˜s beautiful home . In Ghana tonight The gorgeous LupitaðŸ”¥ðŸ”¥â¤ï¸â¤ï¸Skin just like pearls for realâ¤ï¸ðŸ™ðŸ¾

“When I introduce @nimotalaiganiyu as “my assistant”, people usually think I said “my sister”… and now we’re twinning on our 3rd trip to Ghana this year, celebrating at The President & First Lady’s cocktail party. “

During his performance, Davido shared his moment with the President and his wife who hosted the event at their home at Nima in Accra.

Earlier that day, President Nana Akufo-Addo touted the progress of the Year of Return, describing activities generated by the campaign in Ghana as a “welcomed shock”.

In October this year, the President launched the “Year of Return” to make Ghana the focus for millions of African descendants reacting to their marginalization by tracing their ancestry and their identity.

So far, the Ghana Tourism Authority (GTA) revealed they spent GHC6m on the policy’s campaign.

Meanwhile, Nana Addo has launched an extension of the “Year of Return” which he calls “Beyond the Return The Diaspora Dividend”

DISCLAIMER: The Views, Comments, Opinions, Contributions and Statements made by Readers and Contributors on this platform do not necessarily represent the views or policy of Multimedia Group Limited.
Tags:
Davido
Lupita Nyong’o
Nana Addo Dankwa Akufo-Addo