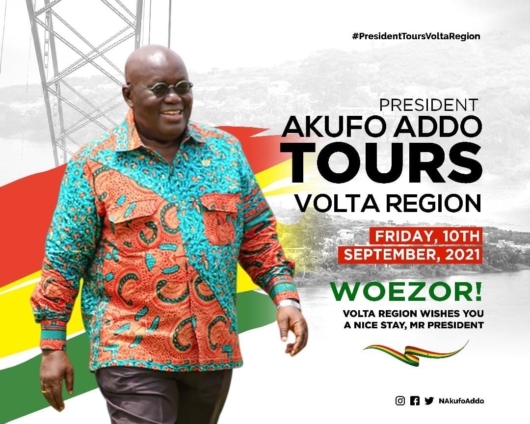 President Akufo-Addo will on Friday, September 10, take his nationwide tour to the Volta Region, the stronghold of the opposition National Democratic Congress (NDC).

The tour would present him with an opportunity to have first-hand information on some public projects in the region and also interact with people in the region on the government’s programmes, policies, and development agenda.

He is likely to press home his proposal to the people of the Volta Region to pitch camp with the New Patriotic Party, to enhance the electoral fortunes of the governing party in 2024.

He is expected to meet traditional authorities, inspect, cut sod, and commission projects in the North Dayi District, Hohoe, and Ho Municipalities.

The President would kick start his tour with an interview on Voice of Volta radio station in Hohoe, after which he would meet traditional authorities from Alavanyo and Gbi Traditional Areas in Hohoe.

He would later inspect a World Bank Secondary City Market Project ongoing in the Hohoe Market and commission a Rural Technology and Solution Centre in Hohoe.

President Akufo-Addo would move to Fodome to inspect the construction of the School of Public Health of the University of Health and Allied Sciences.

Per his itinerary, Chiefs and Queens from the Agumatse enclaves made of Fodome, Gbledi, and Wli Traditional Areas would have the honor to host the President to discuss the development of their localities.

He would later depart to the North Dayi District where he would pay a courtesy call on the Paramount Chief of the Anfoega Traditional Area and President of the Volta Regional House of Chiefs, Togbe Tepre Hodo IV.

The President is expected to commission a lorry park and storm drain in Anfoega before departing to Ho.

He would cut sod for the construction of the China Aid phase II project at the University of Health and Allied Sciences to end his one-day tour of the Volta Region.