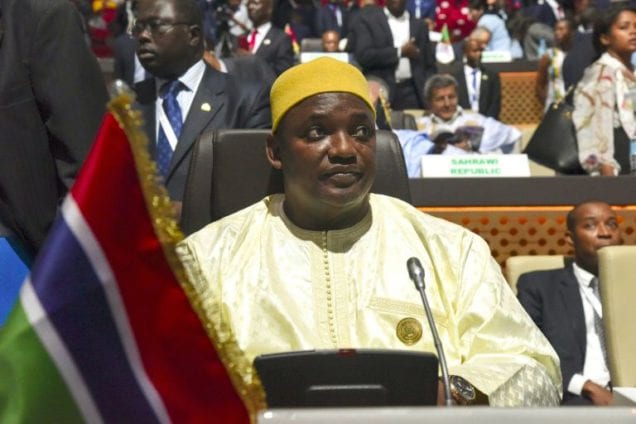 When Adama Barrow was inaugurated as president of The Gambia on February 18, 2017, it signaled a new dawn for its people after the 22-year rule of Yahya Jammeh, the former president with alleged ties to corrupt practices, including press freedom violations.

Tired of the constant human rights abuses, persecution of journalists, endemic malfeasance and a wobbly economy under Jammeh, the people of The Gambia finally spoke in 2016. This time, their voices were loud enough to loosen the grip of one of Africa’s longest-serving presidents over the small country, ending what many described as a reign of terror.

The future of The Gambia rested with Barrow, 54, a businessman who once worked as a security guard and came to power on the back of an opposition coalition.

With promises to reform the constitution, protect the fundamental human rights of citizens, allow media pluralism and freedom of expression, among others, the country was set to tread a new path.

The Gambia During Better Times

After taking control of the country, Barrow began reforms that promoted press freedom. Journalists felt safe to practise. Many of them who were in exile came back home. Families of two journalists who were murdered under Jammeh received compensation with MFWA’s intervention.

The enjoyment of digital rights also received a major boost with a ruling by the country’s Supreme Court declaring as unconstitutional the law on False Publication on the Internet, among other repressive pieces of legislation, like defamation and aspects of Sedition.

For the first time, The Gambia climbed to the 92nd position on the 2019 World Press Freedom Index – a grand slam for a country which occupied the 145th position in 2016.

A Reversal of Rights

Three years down the line, what is supposed to be a new Gambia seems to be zilch, if recent events are anything to go by.

In a campaign communication which sold like hot cake with the electorate, Barrow had promised to serve for only three years as a transitional president on an agreement with the opposition coalition which backed him, according to media reports.

He had pledged to lay the legal and constitutional foundations for a sustainable democracy in The Gambia, then organise fresh elections. But Barrow now reckons the pledge in 2016 should not override the 5-year term mandated constitutionally for presidents.

This U-turn has given rise to the 3 years Jotna movement that is insisting that the government honours its pledge to leave office after January 2020.

Members of the movement organised a protest on January 26, 2020 where hundreds of Gambians came out to demand Barrow’s departure in line with the coalition’s campaign promise.  The government’s response was brutal, reminiscent of the Jammeh era repression.

Immediately after the protests started, the government issued a statement banning the 3 years Jotna group, which it described as “subversive, violent and an Illegal Movement that has all the attributes of a subversive group determined to illegally unseat the constitutionally elected Government.”

Shortly after the statement, a group of police officers stormed two radio stations, King FM and Home Digital FM, shut them down for “peddling incendiary messages” aimed at threatening the peace and security of The Gambia. In all, four journalists, two from each of the affected stations, were arrested and detained.

In a quick rebuttal however, Gambian Press Union, (GPU) strongly condemned the crackdown.

“The modus operandi of this government bears the hallmark of the tactics used by the former government in its disregard for press freedom and the rule of law,” the GPU said in a statement.

Later in an interview with DW, Sherrif Bojang, President of the GPU likened Barrow to “old wine in a new bottle.”

“The reforms that most Gambians were promised we haven’t seen much” Said Modou Lamin Joof, a Gambain journalist. “With his recent actions closing down radio stations, to some extent one might tend to agree with the common saying that people are returning to the days of Jammeh.”

Despite these setbacks, the media in The Gambia is determined to do their work as diligently and fearlessly as ever, and the press freedom fraternity including the MFWA, will accompany them every step of the way. For President Barrow, he needs to do better. He still has a lot to prove to his people and the rest of the world. He should not forget in his own words “Gambia has changed forever. The people are fully conscious that they can put government in office as well as remove it. No government will ever be able to entrench itself against the will of the Gambian people.”