Bailed Arise Ghana protestors to be arraigned on Monday, July 4 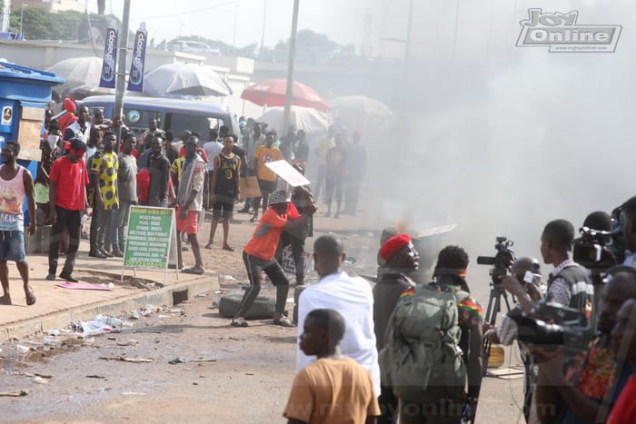 The 29 protestors arrested during the Arise Ghana demonstration on Tuesday will be arraigned on Monday, July 4, 2022.

This is according to the Ghana Police Service.

The Police explained that “the Martyr’s day celebrations today, made it difficult for the suspects to be arraigned before the court” hence the bail.

“Therefore, in line with the constitutional provision of not keeping suspects beyond 48 hours, they were granted bail and will be arraigned on Monday, 4th July 2022.”

The 29 protestors of Arise Ghana who were arrested on Tuesday for their involvement in the chaos during the demonstration were granted police enquiry bail earlier in the day.

The Ghana Police Service on Tuesday arrested some 29 persons in connection with the demonstration by Arise Ghana.

The protest which turned chaotic saw Police and protestors exchanging stones and teargas during a standoff in the afternoon.

The protestors who were demonstrating against the worsening economic hardship in the country were accused by the Police of trying to use unapproved routes.

Lawyers for the 29 people arrested on the first day of Arise Ghana’s Krom Ay3 Shi demonstration had earlier demanded the immediate release of the protestors.

Their lawyers claim they were denied access to their clients on the first day of their arrest.

Lead Counsel for the protestors, Abraham Amaliba had earlier urged the Police to release his clients on a Police enquiry bail since there would be no court sitting on Thursday due to the martyrs day celebration.