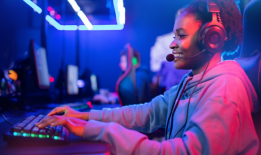 Accra is set to host the world’s largest esports festival from the 9th to the 14th of January 2023.

It is going to be a week of video gaming, exhibitions, demos, seminars, workshops, and socialisation.

PopOut – a leading creative solutions provider – in collaboration with Esports Academy, will host the event, which will bring together renowned gamers from around the world to discuss the future of Esports and how to develop a vibrant video game industry in Africa.

The AEW, among other things, aims at positioning Accra (Ghana) as the most promising gaming hub in Africa to attract the best video game developers, publishers, and platforms.

The panel of experts will also make presentations on why African universities need to run esports courses as well as the essence of promoting gender inclusion.

Vice President of the Global Esports Federation and British Esports President, Chester King; Director and Associate Professor of Esports at Shenandoah University, USA, Joey Gawrysiak; and Vice President of MEA,
India & Emerging Markets Techxhub, Dubai, and Sachin Kapoor are among several experts that will be in Ghana for the Accra Esports Week event.

The activities for Accra Esports Week are listed below:

There will be exhibitions of esports gadgets and equipment from over 100 retailers, as well as a series of immersive demos of gadgets and games. Developers of video games will demo them to the audience, who can also try their hands on the games.

There will be a series of workshops throughout the six days from over 50 industry experts and professionals.

Participants will learn from local and global game developers, professional gamers, industry stakeholders, product retailers, and policymakers during the workshops.

The Esports Industry Awards will be organised by the Esports Association, Ghana
in partnership with the Ghana Esports Federation to award gamers, esports clubs, stakeholders, and organisations that have contributed to the development of esports in Ghana and Africa.

Leading African game developers and companies will exhibit and demonstrate their games to the audience. The participants will have the opportunity to play the games made in
Africa as well as engage the developers. The day will be climaxed with the Africa Games Cup, in which selected gamers will compete.

It will rain huge surprises of free products, great discounts, bigger deals, and unbelievable prizes on the last day of Ghana’s biggest esports experience. These experiences will be unlike any other for participants, retailers, and gamers. The grand finals of all competitions will be held on Saturday.

DISCLAIMER: The Views, Comments, Opinions, Contributions and Statements made by Readers and Contributors on this platform do not necessarily represent the views or policy of Multimedia Group Limited.
Tags:
Accra Esports Week
Esports
Joy Prime
PopOut