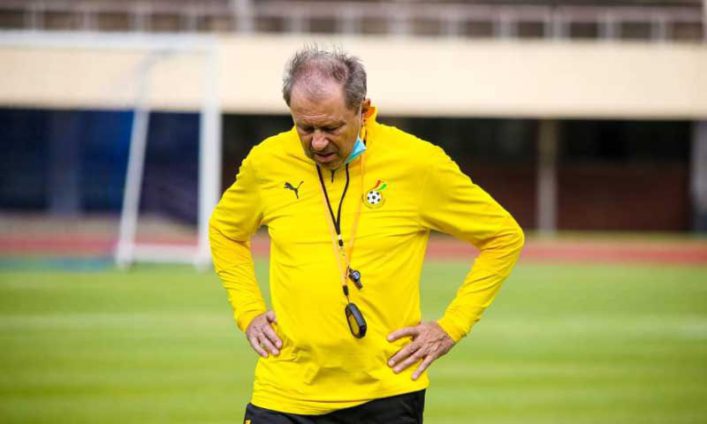 After supervising Ghana’s woeful performance in the ongoing AFCON in Cameroon, the Serbian has been relieved of his duties.

This comes after the Sports Ministry directed GFA to reconstitute the Management Committee of the Ghana Black Stars.

The decision follows an emergency meeting between the Ministry and the Association on Friday.

At the meeting, they reviewed the Stars’ performance at the AFCON 2021 and discussed preparations for the 2022 World Cup playoffs.

In a press statement sighted by JoyNews, the Ministry “made it clear to the GFA that the people of Ghana have lost confidence in the capacity of the current technical team of the Black Stars to deliver success.”

The GFA was therefore directed to “review the work and capacity of the current Black Stars’ technical team, led by the head coach, Milovan Rajevac.”

According to Joy Sports, the GFA at the meeting was hesitant about axing the Serbian particularly because of the severance fee the country is liable to pay – an estimated minimum of $270,000 which could rise to $370,000 if a sign-on fee is included.

Before the meeting, the Sports Ministry expressed its disappointment in the senior national soccer team for its abysmal performance at the ongoing AFCON tournament in Cameroon.

The Black Stars failed to advance from the group stage in the tournament after losing to Comoros in its final game in Group C.

The team exited the tournament with a point. They also lost to Morocco in their opening game and drew with Gabon in their subsequent game.

A statement from the Ghana Football Association announcing Milovan’s removal is expected soon.