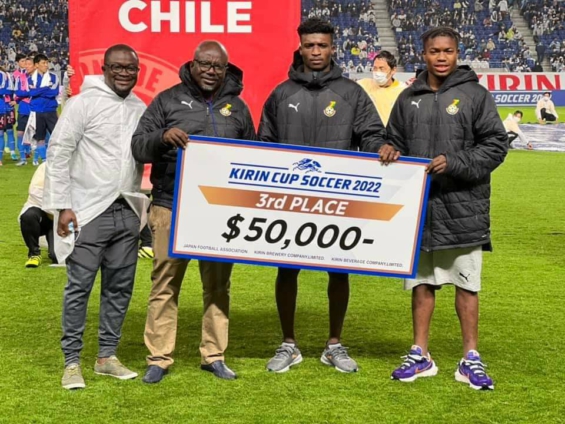 Black Stars have received a $50, 000 cash prize for finishing third in the just-ended 2022 Kirin Cup in Japan.

Despite a poor performance in their opening game against Japan on Friday which saw them lose 4-1, the Black Stars beat Chile to secure third position in the 4-nation tournament.

Abdul Manaf Nurudeen was the hero on the day as he saved two penalties in the shoot-outs to mean the victory for Ghana after a 0-0 stalemate in regular time.

Manaf Nurudeen saved back-to-back kicks from the Chileans after Jordan Ayew scored for Ghana to level the score with the South American side taking the lead while Gary Medel sent his effort off target to give Otto Addo’s side the victory.

The competition served as preparations for the Black Stars ahead of the 2022 FIFA World Cup to be staged in Qatar.

In the final of the tournament, Tunisia beat Japan 3-0 and were rewarded $250,000 in prize money.