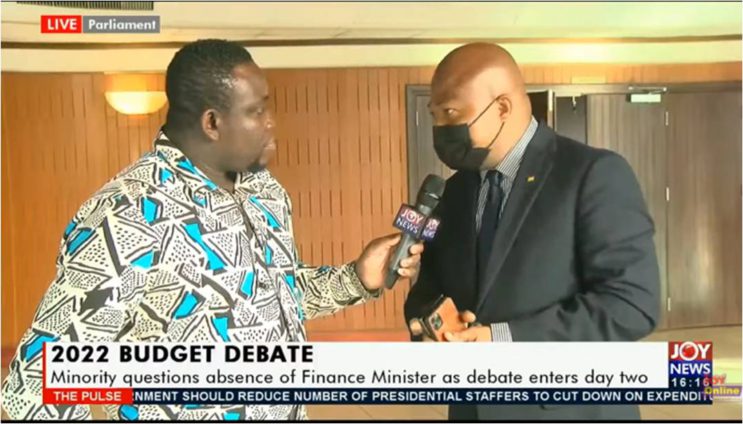 The Minority in Parliament has been waiting for the government to answer questions relating to the cost of President Akufo-Addo’s international trips.

On Thursday, November 18, Okudzeto Ablakwa mentioned that the National Security Minister, Albert Kan Dapaah, was scheduled to appear in Parliament that day to answer the question. However, that did not happen.

JoyNews/AdomNews · Bryan Acheampong must know his limits; he can’t answer for government – Ablakwa

Bryan Acheampong, whilst contributing to the debate on the 2022 budget statement on Tuesday, November 23, said he counseled the National Security Minister to “keep the information of the Presidential travel secret”

The Abetifi MP further argued that the use of chartered flights by the President bothers on national security, thus should not be discussed on the floor of Parliament.

Responding to this, Samuel Okudzeto Ablakwa said, “this new discovery by classification as a top-secret to evade accountability will not wash.”

“The Chairman of the Foreign Affairs Committee must know his limit. He must understand that this is a House of Rules and the Standing Order is very clear that once a question has been admitted, you have no choice,” he told JoyNews’ Kwesi Parker-Wilson on Wednesday.

The North Tongu MP continued, saying that the action by Bryan Acheampong is “undermining the authority of the Speaker.”

“He is affronting Parliament. It is subversive of the work of Parliament and the constitutional authority of the Speaker,” he noted.

He said that the actions by the government that presents a posture of seeming unwillingness to answer the question are not very surprising.

He mentioned that it is for such purposes that a private member’s motion had been filed to “instigate a full scale bi-partisan parliamentary inquiry into the President’s travels.”

Okudzeto Ablakwa further said that the government’s failure to answer the question which was filed in May this year, gives the Minority more basis to reject the new taxes proposed in the 2022 budget.