CAF Champions League: What is at stake for both Hearts and Samuel Boadu? 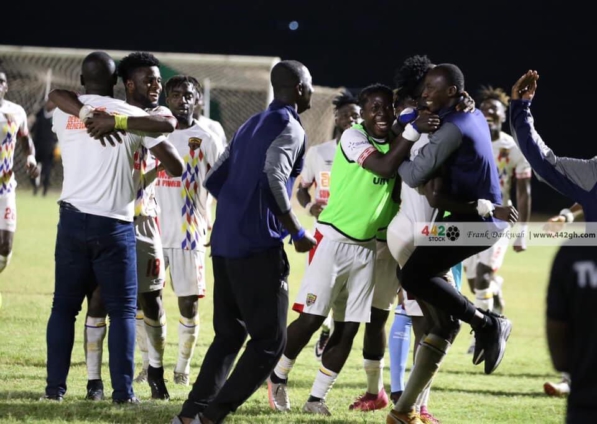 Accra Hearts of Oak will be up against Wydad Athletic Club in the last round of the preliminary stages of the CAF Champions League on Sunday at the Accra Sports Stadium.

The weekend’s game is the first of two-legged games involving the two teams with a place in the group stage of the competition up for grabs.

Hearts have not been in the competition since missing out on the 2009/10 campaign due to ‘financial issues’ despite winning the Ghana Premier League title in 2009. Hence their last appearance coming in 2008, when they were kicked out in the preliminary round by Gabonese side, FC Libreville.

Back in the 2009/10 season, the club cited financial complications as the rationale behind the decision to opt out of the CAF Champions League.

In their absence from Africa’s biggest club competition, Asante Kotoko has represented Ghana in the last editions, failing to make it into the group stage on both occasions.

However, after 11 years, the Rainbow club are on the verge of sealing qualification into the group stage of the competition, a stage described as the ‘Money Zone.’

But what does beating Wydad AC, and making it to the group stage mean to the Phobian club and head coach, Samuel Boadu?

When Boadu took over the club midway through the 2020/21 Ghana Premier League season, one of his ambitions was to get the team to the level they belong to – playing regularly in Africa while also winning titles.

While the latter looks to be on course after winning two trophies last season, the former is another one that must be given the needed attention, starting on Sunday – against the Moroccan side.

The good thing for Hearts is that Ghanaian clubs have won five of their last 10 games against Wydad, losing three and drawing twice.

Kotoko, Ebusua Dwarfs and Aduana are the only Ghana clubs to pick up wins over the Moroccan side while the Kumasi-based side are the only ones yet to be beaten against the same opposition.

Making it to the group stage does not only guarantee the team monetary gains but also gives them the opportunity to lock horns with some of Africa’s heavyweights depending on their progress in the competition.

The players need to replicate the second performance in the game against C.I Kamsar, and even go to Morocco and play to their maximum potential if there are to make those dreams a possibility.

In Wydad AC, Hearts will play a team that is unlikely to have both their head coach and assistant on the technical bench or on the sidelines after the pair tested positive for Covid-19.

According to reports, Walid Regragui, who is the head coach was confirmed to have contracted the virus during his side’s mandatory screening on Friday prior to their departure to Accra. His assistant had suffered the same fate earlier on, making both of the coaches unavailable.

Considering how criticial a coach’s instructions may be for a team on the pitch, the absence of Regragui will likely be an advantage for Hearts, who will have Boadu undertaking his normal duties barring any last-minute hurdles.

Boadu has been phenomenal since assuming the role of head coach at the club and his presence pegged against Regragui’s absence should be one of the deciding factors of encounter between Hearts and Wydad.

Should the Rainbow club topple their opponents in Accra, it will be a huge boost ahead of the reverse fixture in Morocco, and that is exactly what the former Medeama coach will be looking at.

Taking into consideration this is going to be the first of it kind that both teams are facing each other, it will be quite interesting to see how the clubs will approach the game, knowing it could play a big part of their 2021/22 season.