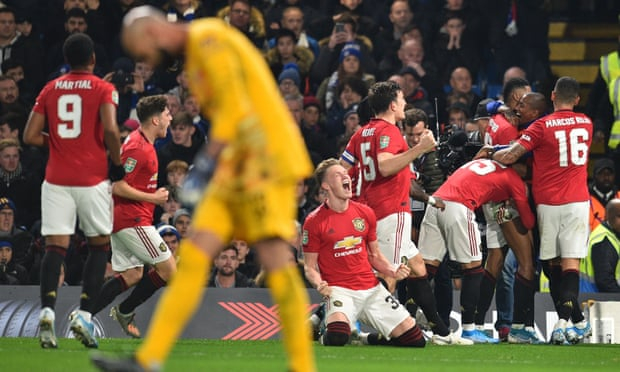 Marcus Rashford stopped a resurgent Chelsea in their tracks as his sensational free-kick fired Manchester United into the League Cup quarter-finals with a 2-1 victory at Stamford Bridge on Wednesday.

Rashford sent his dipping effort from around 40 metres flying past Chelsea keeper Willy Caballero in the 73rd minute after Michy Batshuayi’s well-taken equaliser.

United, who were at near full-strength, had led at halftime through Rashford’s penalty after speedy Welshman Daniel James had been fouled by Marcos Alonso.

Ole Gunnar Solskjaer’s side held out reasonably comfortably to claim a third successive away victory having previously not won on the road since March.

It was United’s second win over Chelsea this season, having beaten them 4-0 on the opening day of the Premier League.

Since then Frank Lampard’s youthful Chelsea side have responded superbly and had won their last seven matches in all competitions to move into the Premier League’s top four.

The draw for the quarter-finals is on Thursday in which United will be joined by Manchester City, Liverpool, Aston Villa, Leicester City, Everton, Colchester United and Oxford.