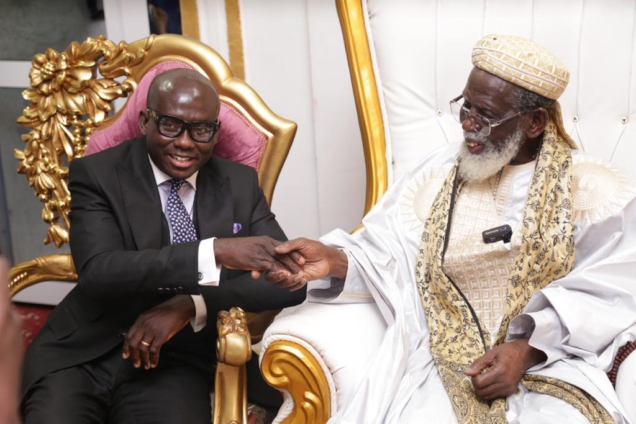 The Attorney-General, Godfred Yeboah Dame (Left) in a handshake with the Chief Imam, Sheikh Osman Sharubutu

The AG on Tuesday, May 18, was joined by Justice of the Supreme Court, His Lordship Justice Tanko, the Solicitor-General, Mrs. Helen Akpene Ziwu, leadership of the Forum of Ghanaian Muslim Lawyers and other high ranking lawyers to honour an invitation by the Muslim Cleric.

The National Chief Imam had invited the Attorney-General as part of efforts to engage selected opinion leaders on the brewing tension within the Muslim community. The seeming tension is arising out of recent incidents in Ghana that suggest intolerance of Islamic practices by sections of the Ghanaian society. The meeting is therefore to discuss and chart a path towards the amicable resolution of this and other related issues.

Expressing his pleasure at the invitation, Mr Dame paid tribute to the important role played by the Chief Imam in solidifying the credentials of Ghana as a beacon of development, rule of law and respect for human rights in Africa.

Speaking on the subject of perceived religious intolerance in some educational institutions, the Attorney-General stated that the laws of Ghana fully recognize the freedom of all persons to manifest their religion and such freedom ought to be upheld even within the context of institutionalized practices by some missionary schools.

This, he said, is achievable. His office will therefore work with the Ghana Education Service to fashion out regulations governing the conduct of education and promotion of discipline in all pre-tertiary institutions to reflect the true values of tolerance as enshrined in the Constitution of Ghana.

In the view of Mr. Dame, “Constitutional conventions and norms must be modeled to serve the basic needs of Ghana in accordance with the ever evolving demands of the society”.

Touching on the issue of a succession plan for the Chief Imam, the Hon. Attorney General stated emphatically that it is not in the place of the state to have an interest or say in how religious bodies choose their leadership.

Doing so, according to him, would amount to, “excessive entanglement of the State in religious affairs”. he said the state’s intervention in religious affairs must be limited to enabling religious bodies manifest their beliefs freely and without any inhibition, as it is currently doing by facilitating the Hajj pilgrimage and supervising the construction of a national cathedral.

On his part, the Chief Imam expressed his joy in seeing a young man of the AG’s stature ascend to such an eminent office of the land and exhibiting wisdom, vision and progressive understanding of matters of law and development.

He said the Attorney-General is the kind of leaders Ghana needed. The Chief Imam took the opportunity to pray for God’s guidance and support for the AG and thanked him for expressing his commitment to work towards amicably resolving the current impasse threatening religious tolerance, inclusion, and equity in some missionary schools.