Does CK Akonnor have the biggest selection headache now? - MyJoyOnline.com

Does CK Akonnor have the biggest selection headache now? 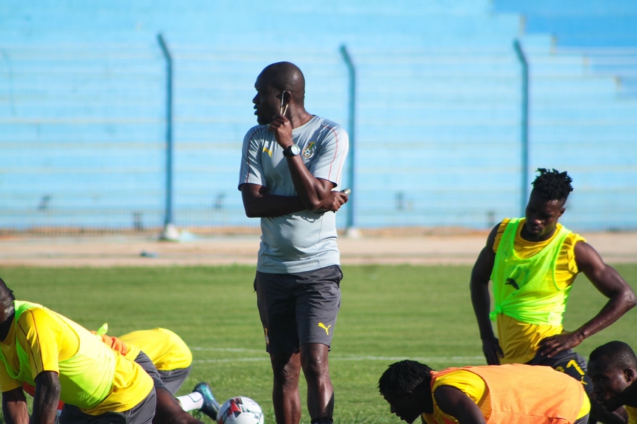 Ghanaian journalist, Chief Seidu Adamu, has stated that the current Black Stars coach Charles Kwablan Akonnor has a big selection headache ahead of the 2021 Africa Cup of Nations qualifiers against South Africa and Sao Tome and Principe this month.

Akonnor might not be able to call most of the foreign-based players due to the COVID-19 restrictions present in their clubs. The likes of Andre Ayew, Jordan Ayew, Thomas Partey among others will be forced to self-isolate on their return to their clubs if they play against South Africa.

In an interview on the Joy Sports Link on Saturday, Adamu highlighted the difficulty Akonnor will face as a result of the COVID-19 situation.

“It is going to be difficult for CK Akonnor at the moment especially when we are set to play a team like South Africa. They pose a lot of challenges to us because they also need to win that game to secure points for qualification,” he told Nathaniel Attoh.

“CK is a man with the biggest headache at this time of the year. I am still struggling to know the kind of team he will put up against South Africa and Sao Tome especially in the case where the players from England and Spain might not come. He would have to rely on about 90% of the local-based squad,” he added.

He also went on to select his preferred XI if the coach is forced to field only locally-based players.

“Razak Abalora has national team experience so he should be in goal. In defense, I would go for the two center backs of Kotoko; Ganiyu and Mubarik. On the flank, I would like to see Dennis Korsah of Ebusua Dwarfs who has had a fantastic season.

He has scored three goals in 17 games. He is the perfect fit for left-back. On the right, my preferred choice was not selected and his name is Michael Ampadu of Legon Cities. Beyond him I will choose Philip Sackey of Great Olympics,” he stated.

“In midfield, Justice Blay can take the holding role, especially against South Africa. Mubarak Wakaso would also offer a shield to our back four. Gladson Awako would also be part of our team.

Emmanuel Boateng should be part of that team (upfront) if no foreign players arrive. Yaw Annor doesn’t offer much defensive cover so I would rather place David Abagna Sandan on the right-wing [and maintain Esso on the left],” he concluded.

Ghana will face South Africa on 25th March and will host Sao Tome and Principe in the final qualification game on 28th March.