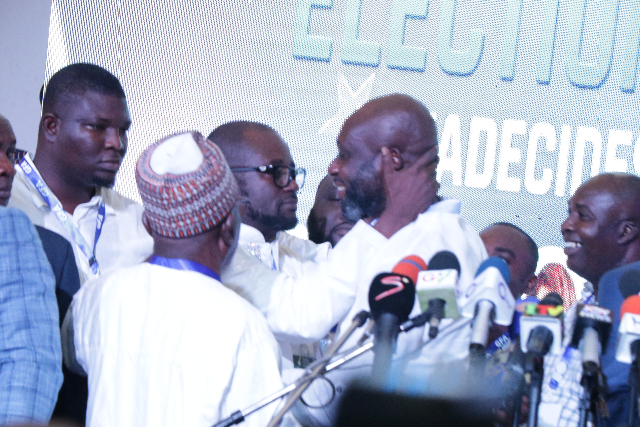 A former Vice President of the Ghana Football Association (GFA) is disgusted with the Association’s current president’s claims that “he cannot win an election and bring his enemies to come and work.”

George Afriyie, in a statement, described Kurt Okraku’s comments as ‘below the belt’ and ‘alien to football.’

The President of Okyemann Planners, who was a candidate in GFA’s October presidential elections said, ‘in football, there are no enemies or opposition.’

His comments follow Mr Okraku’s interview with Joy FM last week Thursday, in which he reacted to critics who accuse him of running a family and friends administration.

He told Lexis Bill on Personality Profile that “…nobody wins an election and brings his enemies to come and work.”

“I will not win an election and bring my enemies to come and work. “

‘I will bring people I believe have the capacity to help me deliver on my promise and everybody I have brought believe in my way,” he stated.

Below is the full Statement below

I convey my warmest regards to you all and I trust you’re well in the lord.

In the past couple of days, I have been left disappointed in some comments made by the Ghana FA President Kurt Okraku.

Mr Okraku in a recent interview to the media described people who subscribe to different opinions on how to run our lovely football as enemies.

I strongly believe that words such as enemies are alien to football and cannot be an efficient tool for galvanising people of different views together for the betterment of our football.

One of my key philosophies and beliefs as a football person is that we cannot be enemies in football. This belief was rightly mirrored in my concession message in the immediate aftermath of the GFA Presidential elections race in which I conveyed a message of unity and rallied my supporters to offer their unwavering backing to Mr Okraku and his GFA administration.

I espoused these beliefs because I believe that along with other losing contenders we still have a lot to offer Ghana football along with our various supporters. BUT, for Mr Okraku to label all of us as enemies and cannot work with any of us because we have our separate views on how to run football in Ghana is very unfortunate.

While I agree with Mr Okraku that the prerogative on who to employ at the GFA solely rests within his remits I also believe describing others who do not believe in his leadership as enemies is way below the belt.

It has now become clear that some very seasoned, competent and qualified administrators were out of the vehicle of our football transformation due to their openness to divergent views and declaration of support for other candidates during the elections.

Meanwhile, some highly competent and experienced staff members of the Association are being cowed into submission and in some cases horned out completely. This is not good for our football development.

In football, there are no enemies or opposition. These are purely political elections terms at best and have absolutely no place in our football. The greatest symbolism of this can be seen on the field of play among the 22 players competing for victory. Football is a team sport and not a constant political affair.

I, George Kwasi Afriyie, do not regard Mr Okraku as my enemy, as I have previously worked together with him in various capacities at the GFA.

I call on the entire rank and file of the football fraternity to remain united, regardless of the rather regrettable perception of the President that some are enemies of the current administration.