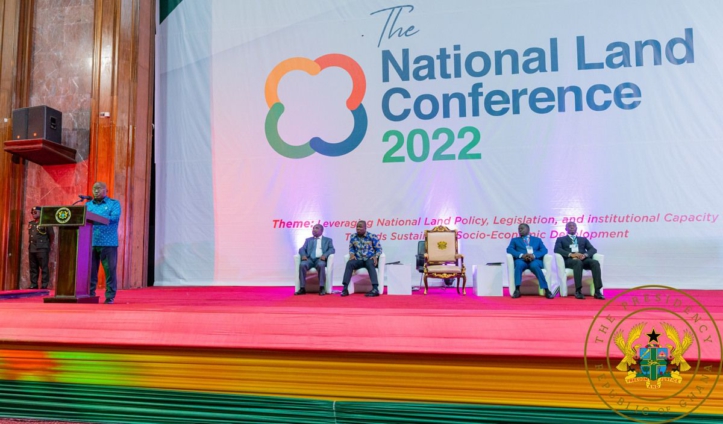 President Nana Addo Dankwa Akufo-Addo has charged the Lands Commission to expedite action on the digitisation process of land acquisition.

Addressing the maiden National Land Conference, organised by the Lands Ministry on Wednesday President Akufo-Addo stated that in this technologically advanced age, it is unacceptable that many sectors of the economy still operate in a largely manual environment.

“We cannot deliver an efficient land administration if documents on land have to be processed manually. We must, therefore, expedite action on the digitalisation process, and ensure that the Commission goes fully digital. As you go into technical discussions, it is my hope that this will be key on your agenda’’, he said.

Reiterating the significance of land to the socioeconomic development of the country, the President noted that a rapidly growing population, coupled with competing uses of land, continue to put immense pressure on our land resources.

According to the President, it is for this reason that, “during the first term of my presidency, we prioritised the passage of the Land Bill, which had been in the draft stage for some 20 years.”

The Land Act, 2020 (Act 1036), which he assented to on 23rd December 2020, the President explained, “revises, harmonises and consolidates laws on land to ensure sustainable land administration and management, as well as effective and efficient land tenure systems.”

The most significant intervention has been the Land Administration Project (LAP), Phases 1 and 2, which sought to lay the foundation and consolidate urban and rural land administration and management systems for efficient and transparent land service delivery.

“But laws, in themselves, do not resolve problems. It is their application and effective implementation that yield the requisite results. That is why this conference, which brings together diverse people from different sectors to deliberate on the nexus between land and socio-economic development, is so crucial”, he emphasized.

The President continued, “Fortunately, the Land Act, 2020 (Act 1036), provides a strong foundation for fashioning out a workable and efficient land administration. The Act has far-reaching provisions which, if implemented, will go a long way to build the effective land administration we desire’.’

Key amongst them, he said, is the establishment of Customary Land Secretariats to see to the management of stool, skin, family and clan lands, restrictions on large-scale disposal of family and clans lands without the concurrence of the Regional Lands Commission, the power of the Regional Commission to survey and demarcate land, the provision for electronic conveyancing, the detailed provisions for the compulsory acquisition of land including the payment of compensation, the management and use of public lands, and the provisions for divesting of vested lands.

The Act “also addresses the challenges associated with boundary demarcation, and clarifies rights and interests in land, and persons with capacity to alienate land. It provides stringent jail terms for various offences related to lands, such as landguardism, falsification of records and fraudulent transactions in land administration”.

President Akufo-Addo expressed his satisfaction with the Ministry of Lands and Natural Resources and the Lands Commission who are leading the sensitisation and education of this important piece of legislation.

DISCLAIMER: The Views, Comments, Opinions, Contributions and Statements made by Readers and Contributors on this platform do not necessarily represent the views or policy of Multimedia Group Limited.
Tags:
Akufo-Addo
Lands Commission
Lands Ministry
National Land Conference