Falz’s ‘This is Nigeria’, Stonebwoy’s ‘Run Go’, Burna Boy’s ‘Monsters You Made’ trend amid EndSARS protest 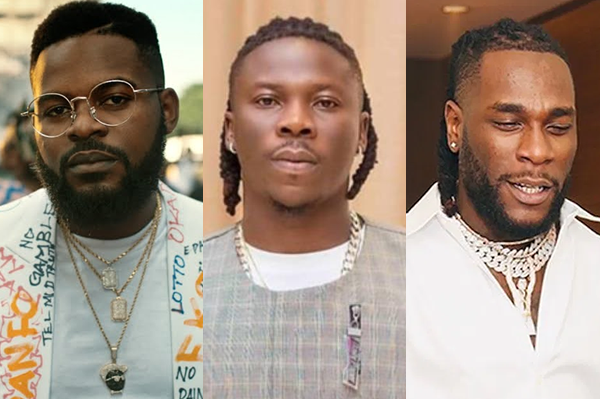 Falz, Stonebwoy and Burna Boy are among artistes whose songs have been referred to by fans as timeless

The #EndSARS protests in Nigeria have led to the resurfacing of some songs that addressed good governance, corruption and exposing dishonest political leaders.

Falz’s ‘This is Nigeria‘ has become one of the go-to songs for many people who want a visual representation of some of the activities in Nigeria that protesters of EndSARS are discussing.

‘This is Nigeria’ is the rapper’s spin-off on Childish Gambino’s ‘This Is America‘ released in 2018. The song was released at the time America was faced with issues of increased gun violence, police brutality and racism.

Falz posted his version of the song months after the American rapper’s song went viral.

He began by highlighting some of the troubles Nigeria deals with including poverty, inadequate medical facilities, police brutality, among others.

“We operate a predatory, neocolonial capitalist system, which is founded on fraud and exploitation, and therefore, you are bound to have corruption. Many criminal cases are settled in police stations,” Falz stated.

In the video, he exposes the activities of the now-disbanded Special Anti-Robbery Squad (SARS), corrupt political leaders and fake prophets.

Many fans say the song “perfectly” explains their frustrations and challenges with security, social issues among others.

“I had to come watch this again with the #ENDSARS movement going on. I’m a tired Nigerian,” one fan wrote under the post on YouTube.

Another fan who only had praises for the rapper wrote, “I’d always known Falz was a lowkey passionate reformist just inside the cloak of a musician. No matter how much music he sings, he does not know how to conceal it. Your name is already entrenched in gold brother. Plenty appreciation.”

“Now Una wan run go after making our land a bitter place to live in,” Davido had written in the Twitter.

The song released in 2015 addresses political leaders. Stonebwoy calls them out for making life tough for citizens while they seek solitude on another man’s land.

“Tell me where we gonna run go, after making our motherland a bitter place to live,” he asks.

Some fans gushed over the fact that people are seeking comfort in the celebrated artiste’s song.

“Run Go” is my all time favorite song from Stonebwoy and in perilous times like this, it comes in handy and as the perfect anthem to #EndSars 🇳🇬😢♥️#YaadSettingz

Monsters You Made – Burna Boy

Burna Boy was once again deemed an inspiration and role model for youth in Africa after releasing his Twice As Tall album.

Hence it is no surprise that fans and EndSARS advocates turned to one of the most popular song on the album to seek solitude and help preach their course.

Monsters You Made’, features a 23-second snippet of the much-revered Ghanaian author and playwright, Ama Ata Aidoo’s rant during an interview on imperialism and its attendant effect on Africa.

“Since we met you people 500 years ago, look at us, we’ve given everything, you’re still taking. In exchange for that we have got nothing. Nothing! And you know it”, she says emphatically on the song.

Burna Boy, passionately raps “You know we come from a place, where people smile, but it is fake, how could they smile if you look around they are surrounded by pain.”

“If the government refused to develop the region and continue, the marginalization and injustice, the youth that’s what coming after us
And it will be more brutal, than what we have done.”

“…Ain’t comprehending the hate that the oppressed generate. When they’ve been working like slaves to get some minimum wage, you turn around and you blame them for their anger and rage. Put them in shackles and chains because of what they became. We are the monsters you made.”

As a strong advocate for the independent thinking African, the award-winning novelist is a key proponent of rewriting the African narrative.

Patoranking’s Heal The World has also become one of people’s go to songs amid the EndSARS protests because of its positivity.

“Africa blessed with a lot of beautiful history but these people makes we feel like everything is a mystery.”

“They make we live we lives in jittery. We pray to God father to give us victory,” he had said.

Many fans of the singer’s music stated that they appreciate he makes music that resonates so much with people and their struggles.

All we want is a new nigeria pic.twitter.com/rjsn9U6BmO

Many people in the midst of #EndSARS keep unearthing more music resonating with them in this time of grief and struggle.

DISCLAIMER: The Views, Comments, Opinions, Contributions and Statements made by Readers and Contributors on this platform do not necessarily represent the views or policy of Multimedia Group Limited.
Tags:
Burna Boy
Falz
Stonebwoy
This is Nigeria