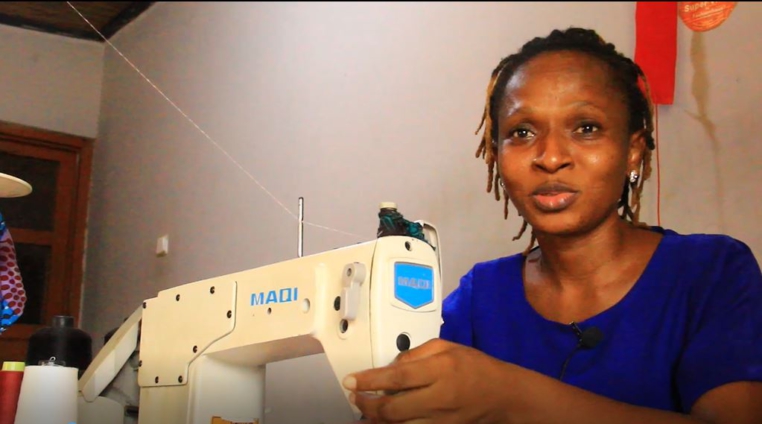 “I always wanted to learn how to sew and I told it to Fatima years ago.”

Olivia took advantage of the COVID period to learn about fashion design at the Fatsu Garment Design Institute.

Olivia now draws on the knowledge she has gained to sew clothes for the family, especially during the festive seasons.

“Some friends came so that I could do it for them, but I didn’t have time,” she said.

Olivia says she’s managed to save GHS 800 for the family since she started sewing for herself and her daughter.

But for Nadia Yussif, she completed T.I Amass senior high school in 2013 and after working for a oil company in Tamale,. She chose to enroll at Fatsu Garment Design Institute.

“I decided to go to Fatsu garment because l had the chance to learn how to design zigzag, so l find myself thinking of how to create a garment and my sister’s friend recommended Fatsu college for me.”

While the 27-year-old is now settling down, she says the knowledge gained is overwhelming.

The urge to do something different, not get bogged down in life and explore her potential and abilities has encouraged Fatima Sumani to stand up and create job for herself and others.

Fatima departed from the professional programme she studied at University for Development Studies (UDS) to embrace what is fetching income.

She studied Bachelor of Arts Integrated Development Studies and graduated in 2011.

But while some graduates ventured into other things to survive the economic realities, others simply chose to do things outside the certificate they earned from university.

Fatima is among hundreds of graduates who have chosen to create jobs outside their university certificates.

She opted to learn how to sew for colleagues at UDS to express creativity, create wealth and for personal fulfillment.

At the end of our national service in 2012, she decided to enrolled herself into Abbi Creation University college for six months fashion.

Fatima says she saved the monthly allowance for that purpose and established Fatsu Garment Design institute in 2014.

The 34-year-old does not regret taking that decision.

So far, Fatima has trained 21 women at her institute. Six of them, including Olivia, who is 37 years old, are graduates of universities across the country.

Nafisah Abdallah, a real estate graduate from KNUST, and Blessilla Na-Afoe Kandoh who also studied community Nutrition from UDS are among the current trainees.

Nafisah for instance, prefers being an entrepreneur and creator of wealth to being someone’s employee.

But for Blessilla, who is currently the Youth Advocacy and Campaign Coordinator at Noorsac, she wants to track down Olivia, sew for family and friends.

Fatima says there is hope for her business and there is also hope for graduates are chasing too few jobs.

Learning handicrafts, networking among others have become the “in” thing as everyone struggles to beat the economic downturn.