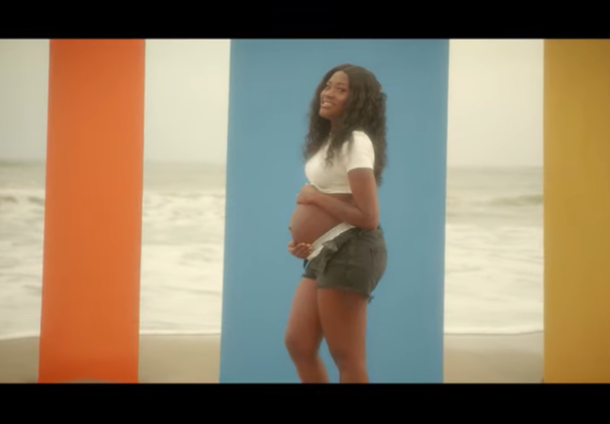 The couple unveiled the pregnancy in the rapper’s new song ‘Odo’ which features singer King Promise.

In the video, set at the beach, Fella Makafui is seen wearing an all-white ankle-length dress with her back turned to the camera. After seeing close-up shots of her face, her baby bump is revealed halfway into the video.

Medikal then joins her at the beach. The ‘Omo Ada’ hitmaker, born Samuel Adu Frimpong, kneels down to kiss his wife’s baby bump.

Fella Makafui also shared a photo from the set with the caption “Glory be to God.”

The video also has scenes from the couple’s star-studded wedding which took place in March 2020.

This unveiling follows months of rumours of Fella Makafui’s pregnancy. These rumours sparked after she fainted during their wedding.

The actress, however, came out to say that it was a prank she had pulled on her husband.

Her social media fans and followers believed these rumours to be true when she shared a video of herself in June. She seemed to have gained some weight, presumably as a result of her pregnancy.