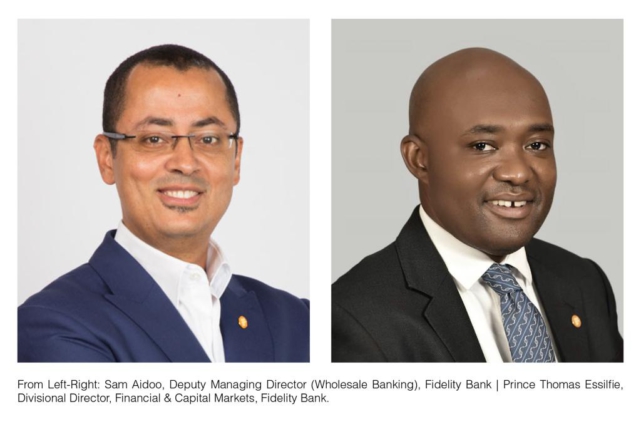 Fidelity Bank Ghana, one of the top Banks in Ghana, has over the years initiated strategic projects with key industry stakeholders to support the growth and development of the financial and capital markets in Ghana.

The Bank has teams that specialize in a number of strategically important sectors that support Ghana’s real economy. They recognize that achieving sustained economic growth requires strong partnerships with critically important market stakeholders, if they are to realize lasting positive changes. One of their key markets of focus is the country’s financial and capital markets.

Fidelity’s commitment to support Ghana’s economic growth led to the establishment in 2017 of a specialized unit to develop tailor made solutions to assist the private and public sectors to take advantage of the nation’s vibrant financial and capital markets.

This successful setup has quickly become a sound model for the market, providing a suitable framework for other participants to build out new and important business lines to further support the growth of our markets.

Commenting on Fidelity’s contribution to Ghana’s financial and capital markets, Sam Aidoo, Deputy Managing Director of Fidelity Bank, stated that: “Fidelity Bank is committed to partnering with both private and public institutions in creating more marketable offerings in a bid to attract sustainable international and increasingly important, local financing for development projects in the country. The successful issuance of the recent US$3.025 billion Eurobond by the government of Ghana is proof of the enormous financing opportunities that are available to the government and businesses in the financial and capital markets space.”

Mr. Aidoo further commented that this recent Eurobond issuance not only marked the first time a zero-coupon bond denominated in USD had been issued by an Emerging Market Nation but more importantly that its success is largely attributed to the fact that more than half of the new money raised in this novel tranche came from the local Ghanaian investor base.

He added that this result was due to the strong collaboration between Fidelity Bank and other local financial institutions.

Over the years, the Bank has spearheaded a number of innovations and market developments in Ghana’s financial and capital markets that have resulted in substantial financial gains for the country. Some of these development projects are in the energy and construction sectors, as well as international financial transactions like the aforementioned US$3.025 billion Eurobond issuance.

On international transactions, Fidelity Bank was the first local bank to manage the logistics for a Eurobond issuance for Ghana. Prior to 2018, leading any aspect of a country’s access to global financial markets was deemed the preserve of only multinational banks in developed countries.

On the local front, Fidelity Bank continues to add value to Ghana’s future economic growth potential. In July 2017, the Bank was appointed as Joint Lead Manager for the GHC 10 billion E.S.L.A. Plc Bond Programme under which cedi-denominated medium to long-term amortizing bonds were issued. Over GHS 7 billion has been raised since the launch of the Programme and its success created the financing solution blueprint for other cedi-denominated bond issuances.
In order to deepen local market participation, in 2018, Fidelity Bank was made Joint Bookrunner for the public sector’s medium to long term bonds. This bold move resulted in an increase in local participation from 34.57% in December 2017 to 72.10% as at March 2021, largely driven by the efforts of Fidelity Bank and its partners.

Additionally, to lead innovation in the local financial market, Fidelity Bank in December 2018 executed the first ever cross-currency total return swap of approximately USD 40 million with Société Générale and Frontclear. Hitherto, cross-currency swap transactions were not pursued by industry players due to the myriad of challenges that confront parties when executing cross-border transactions.

The successful execution of this transaction clearly showcased to the international community and to local players that with the right structuring, cross-currency transactions can be executed in frontier markets like Ghana.

Future Outlook
According to Fidelity’s Divisional Director of Financial and Capital Markets, Prince Thomas Essilfie “Fidelity Bank is looking to broaden its product offerings in domestic financial and capital markets by partnering with the public and private sector, retail and institutional investors, and domestic banks to foster overall economic development.”

He further noted that “The Bank believes that its financing solutions and product offerings will deepen the knowledge of the domestic banking space and further contribute to the capacity development of the domestic financial and capital markets.”