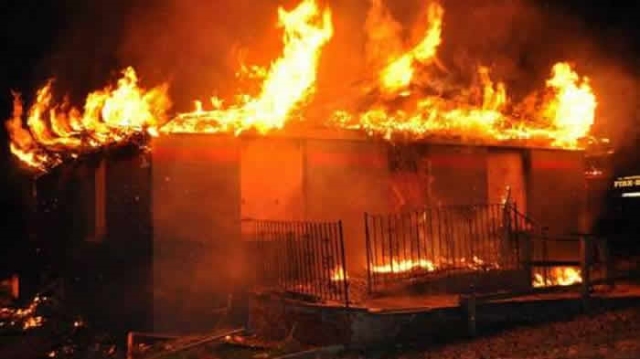 A 12-bedroom storey building at Obuasi Mangoase was on Sunday burnt to ashes with residents unable to salvage anything from their apartment.

One of the victims, Mohammed Daniyalu had only returned from overseas a day ago and had lost important items in the blaze.

Narrating his ordeal to our sister station, Adom News, Mohammed revealed he lost a sum of $5,000, travelling passport and other vital documents in the inferno.

“The fire completely razed down our house. We couldn’t save anything. I got back from abroad at about 9pm yesterday. Immediately I tried to rest for some time. That was when we began to smell smoke. It got intense so I quickly got the children out of the house. I lost $5,000, passport and other valuables,” Daniyalu explained.

Another tenant said she had nowhere to spend the night since all her belongings were destroyed.

The cause of the fire is yet to be ascertained.

Residents say the Ghana National Fire Service was called to intervene but personnel said their fire tender was not in good condition to assist.

The Obuasi Municipality Director for National Disaster Management Organisation (NADMO), Bismark Akowauah said his team of personnel did their best to douse the fire but access to the house was a major challenge due to the poor layout of the settlements.