Food shortage: Some SHS are yet to receive food supplies from Education Ministry 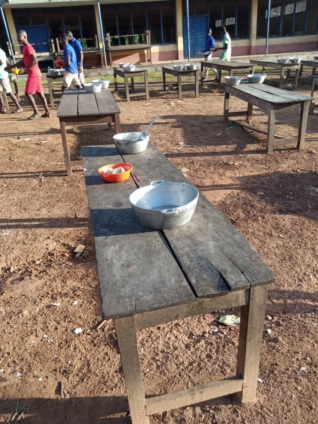 Reports reaching JoyNews is that there is an anxious wait for food supplies in senior high schools across the country as students are hungry and forced to feed on the little available.

In barely 24 hours, Heads of second cycle schools in the Eastern Region will be making a strong push for a shutdown. They insist running the schools has become a herculean task. The situation is not any different in other schools.

In the Upper West Region, schools are yet to receive the food items promised by the Ministry of Education.

JoyNews/AdomNews · Food shortage: Some SHS are yet to receive food supplies from Education Ministry

Students at Wa Technical School expressed their frustration with the food shortage in an interview with JoyNews’ Rafiq Salam.

According to them, their studies have been affected as a result of the situation, adding that “most students have not even reported because of the shortage of food.”

“Since there has been food shortage, our studies have not been normal .. when you go and take breakfast, there is no sugar which is affecting us…in fact, we are really dying,” a student said.

Another student said: “Some of us when reporting to school, we did not get money to buy gari, sugar, milo and others so as we are in school right now, studies is really difficult for us.”

The students also complained about lack of variety in the dish served to them.

“For the past two months, we have been taking ‘tuo zaafi’ as supper. Every evening we take TZ but normally we used to take banku and TZ, but nowadays it is only TZ.”

In the Central Region, the situation is the same. JoyNews’ Richard Kwadwo Nyarko reports that schools are borrowing food from neighboring schools that have more in order to feed students.

However, there is some good news in the Upper East Region, as some schools have taken delivery of food items.

“People always talk of the possibility of heads being corrupted. Of course there may be a few cases but the majority of heads are very honest. They care about the school children,” he said.

In his view, if the Free Senior High School programme is not reviewed to allow some parents pay fees, the situation will only get worse.