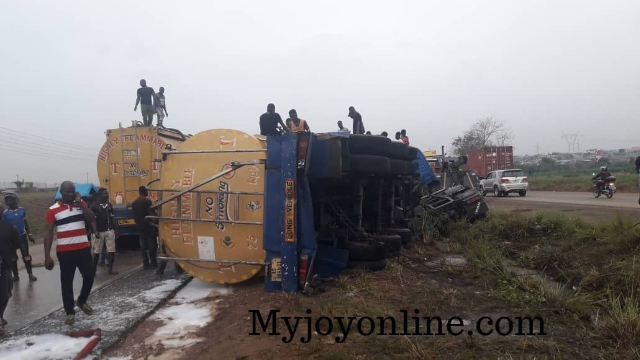 A diesel filled tanker with registration AS 8846-11 has overturned Tuesday afternoon on the Accra-Tema motorway.

The driver who reportedly noticed a fault with the bulk of the car tried to balance it but to no avail.

The incident attracted a lot of crowd to the scene as some tried to make away with the spilled diesel.

It took the intervention of the Police Service and officers of the Ghana Fire Service to maintain order and prevent theft of the diesel.

According to 2IC Dadson, the Kasapreko Fire station was contacted and officers from there have put the situation under control.

“We tried as much as possible to control the crowd that is why we have the police here,” he told Myjoyonline.com’s Seraphine Dogbey.

“The Fire Service was called to try and ascertain the problem to lift the bulk or try and get the content out of it” he explained.