Gbi Chiefs debunk allegations of conflict between locals and Muslims 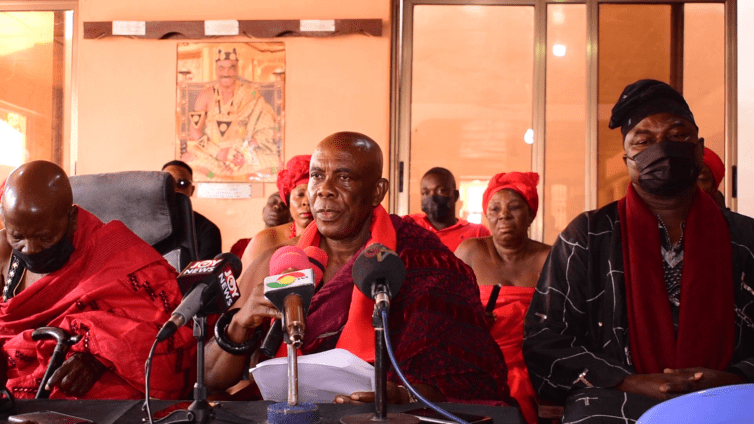 The Gbi Traditional Council has debunked allegations suggesting the tendency of a conflict between Hohoe indigenes and the Muslim community during the funeral of the late Paramount Chief, Togbega Gabusu VI.

The funeral to mark the Royal Journey of the late vociferous traditional ruler to his ancestors is slated between Tuesday December 7, 2021 and Wednesday December 15, 2021.

The Divisional Chief of Gbi Wegbe, Togbe Keh XII, stated that it is an undeniable fact that there was conflict between the two factions in 2012, however, the issues have been resolved, resulting in the Gbis and the Muslims living in peace and harmony during the past 9 years.

Speaking at a joint press conference by the Gbis and Muslims in Hohoe, he urged the public to treat the allegations in the audio circulating on social media with the contempt it deserves.

“We found this audio as false, mischievous, irritating, destructive and orchestrated to mar our cordial relationship between the Gbis and the Zongo Community in Hohoe”, he lamented.

He further indicated that the traditional authorities identify the speculations “as a well-calculated attempt to disrupt” the final funeral rites of Togbega Gabusu VI and tarnish the hard-won reputation of the Gbis and their allies.

Togbe Keh XII implored the public and revellers worldwide, who may wish to witness the funeral – which would be a classic showcase of the culture and tradition of the Gbis – to treat the audio with the contempt it deserves.

“The originator of the audio is being pursued. We want to assure all and sundry that the peace in Gbi (Hohoe) is unquestionable and would be sustained during and after the burial rites of the Late Togbega Gabusu VI.”

“All are hereby welcomed from home and abroad to come and mourn with the Gbi State in this critical moment and period of grief”, he said.

The Mengua’s Representative of the Zongo Community, Ridwanu Meriga, reiterated the cordial relationship between the Gbis and Muslims in Hohoe, adding their commitment to maintaining the peaceful coexistence.

He, indicated that the Muslim leaders had informed the security agencies about the audio in circulation, hoping they act on it and bring the perpetrator to book.