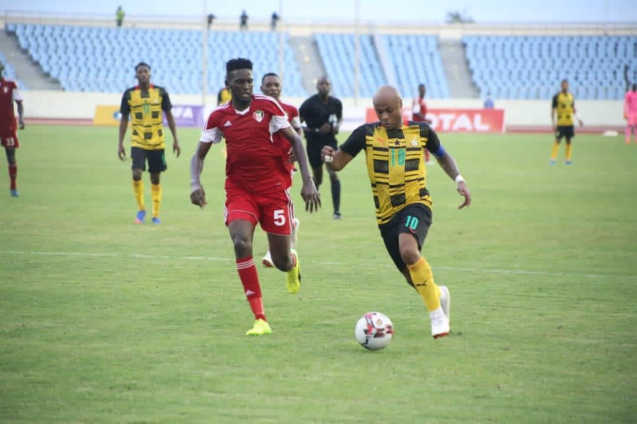 Ghana made it three wins out of three games in the 2021 Africa Cup of Nations qualifiers after beating Sudan 2-0 at the Cape Coast Stadium on Thursday.

A brace from captain Andre Ayew was enough to hand CK Akonnor his first competitive win as Black Stars coach.

Here is how we rated the players:

Looked jittery from the start and made a mistake in the first half which almost allowed Sudan an opportunity to equalise. He looked to have pulled a muscle in the second half but looked okay. He later fumbled a cross late on which could have handed Sudan a goal.

Started well but faded as the game wore on. Failed to also provide defensive cover for Djiku and Boye.

Was barely involved in the game and looked a shadow of himself. Was exposed defensively and also didn’t utilise his strength of attacking down the wings.

Made some interceptions and looked strong at the back for the most parts. However, he looked a bit vulnerable sometimes due to a lack of communication.

Won all his aerial duels and also made some good tackles. Communication with Djiku will have to improve.

Broke down the Sudan attack a number of times but wasn’t very convincing on the ball. Didn’t really progress the ball well and also made some bad decisions on the ball.

Looked like a spectator for most part of the game due to poor positioning. Slowly grew into the game but decision making wasn’t the best.

The winger started the game very well demanding the ball most times. He also created a chance for Samuel Owusu in the first half and linked up well with Jordan and Andre.

Was caught on the ball a number of times as his final output was below par on the day. Had a glorious chance to double Ghana’s lead in the first half but fluffed his lines.

A man of the match performance by the captain scoring both goals in the game. Was all over the pitch and worked tirelessly.

Could have had a couple of goals had his positioning been better. He once again spent more time outside the box than in it and tried a fancy flick in front of goal when he could have been more decisive.

Enjoyed 27 minutes of the game and was a constant threat with his runs behind. He was played through on goal but was denied after a last ditch tackle. The striker also set up a chance for Andre who skied his effort.

Had to be used as an auxiliary right back after he came on for Nettey in the second half. Made one crucial clearance but distribution was poor.

Had limited options as he had to make a lot of late changes to his squad due to medical reasons. The team pressed well but looked less cohesive upfront failing to really carve open the Sudanese defence.

DISCLAIMER: The Views, Comments, Opinions, Contributions and Statements made by Readers and Contributors on this platform do not necessarily represent the views or policy of Multimedia Group Limited.
Tags:
Black Stars
Black Stars squad
Sudan