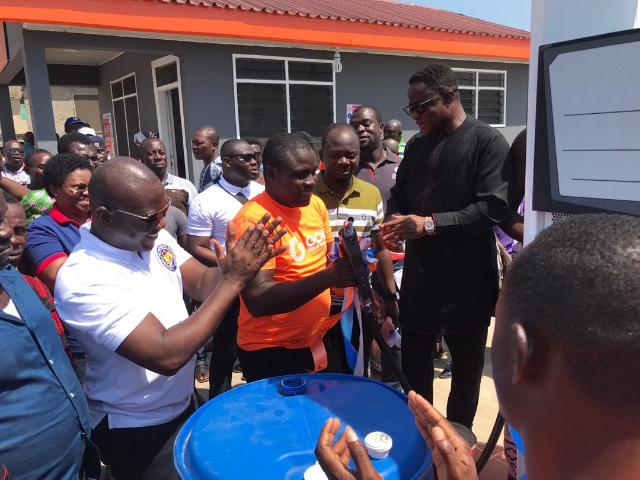 Energy Minister has said government through the National Petroleum Authority (NPA) will continue to roll out stringent measures to deal with premix fuel cartel, whose activities negatively impact the fishing industry.

John Peter Amewu said the Ministry will continue to give stringent policy directions to the Authority to ensure protection is given to the business of genuine players in the industry.

Speaking at the commissioning of one out of six premix retail outlets in Winneba in the Central region, he said “We are happy to learn that stringent measures instituted by government have discouraged the practice of diversion which is detrimental to our effort at building a just and fair society.

“We are told it has consequently impacted the efficient and equitable distribution of premix fuel to fisher folks which have gone great lengths to reverse the perennial challenge of shortages.”

The facilities commenced in 2015 between NPA and GOIL to provide safe and decent retail outlets aimed at eliminating the safety risk posed by the makeshift premix retail outlets along all the landing beaches across the country.

When it creates rents all sorts of people come in the middle and the fishermen who are the ultimate beneficiaries do not even get the product because the products are smuggled to non-fishermen.

These other people who are crooks in the industry tend to hoard the product and sell them later at exorbitant prices to our fisher folks or uses it to adulterate gasoline as a result of the significant price differentials between these products due to subsidies.

The Energy Minister said his Ministry will continue to give “policy directions to the NPA to ensure protection is given to the business of genuine players in the industry.”

Peter Amewu said they will work closely with the Ministry of Fisheries and Aquaculture and the National Premix Secretariat to expose the fraudulent ones desperately trying to undermine the decency of premix fuel distribution and consumption.

On his part, the NPA Chief Executive Hassan Tampuli said the installation of tracking devices on Bulk Road Vehicles (BRVs) which enable the Authority to monitor the vehicles’ movement from the depots to the delivery points.

He said it will also help in the marking of petroleum products with a bio-marker which gives it a unique identity, to deal with the cartel.

“The drastic reduction is attributed to programmes and policies rolled out by the NPA in collaboration with National Premix Fuel Secretariat to monitor the distribution of premix fuel to ensure that the subsidized premix fuel gets to the fisherfolks,” he said.

He assured the fishermen and all other stakeholders that NPA will continue to create an enabling environment to position the premix industry for accelerated growth.