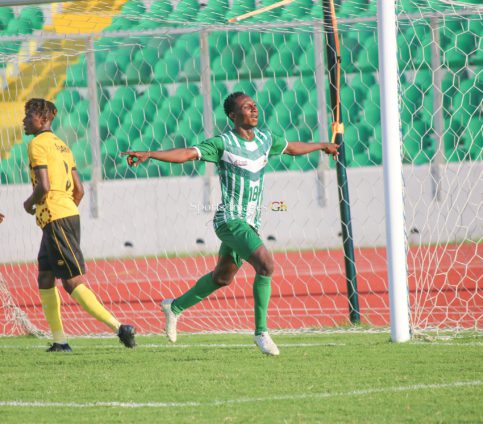 Having seen the game between Bibiani Goldstars and Asante Kotoko kickstart the matchday three of the Ghana Premier League on Friday, Saturday and Sunday took their turns.

Reigning league champions, Accra Hearts of Oak could only manage a draw against Aduana Stars on Sunday, with Bright Adjei’s 80th minute goal from the penalty spot cancelled out Kofi Kordzi’s opener for the Rainbow club.
Mohammed Alhassan was sent off in the game after a foul committed in the penalty box, resulting in Aduana’s equaliser.

Bechem United saw off the challenge from Elmina Sharks as they recorded a 2-0 victory at home. Obuoba Yaw Dasi and Francis Twene were on the scoresheet for Bechem, who bounced back to winning ways after losing to Kotoko last weekend.

Away from home, Medeama SC were held to a goalless draw by Techiman Eleven Wonders, extending Ignatius Osei-Fosu’s winless run at the Tarkwa-based club to three games. He is yet to win a league game with the Yellow and Mauve side this season.

King Faisal’s fairytale start to the 2021/22 Ghana Premier League continued as they beat Ashgold at the Baba Yara Stadium. In-form striker Ibrahim Osman was among the goals once again while Enock Morrison scored the other for King Faisal.

In an interesting contest at the Crosby Awuah Memorial Park, Karela United recorded a 2-1 win over Berekum Chelsea to move up sixth on league table after three games.

On Saturday, Dreams FC returned to the Theatre of Dreams in Dawu for the first time this season after being given the green light.

A goal from Ali Huzaif and a double from Mensah Agyenim Boateng ensured a 3-1 victory for the Believers against Accra Lions, with Rauf Salifu scoring the consolation for the newly-promoted side.

Legon Cities suffered their first loss of the season, with Maxwell Nii Abbey Quaye’s first half-strike powering Accra Great Olympics to victory over the Royals at the Accra Sports Stadium.

Kotoko’s win on Friday night means they keep their spot on top of the league table after three wins in three games, with rivals King Faisal occupying the second position, also on nine points.