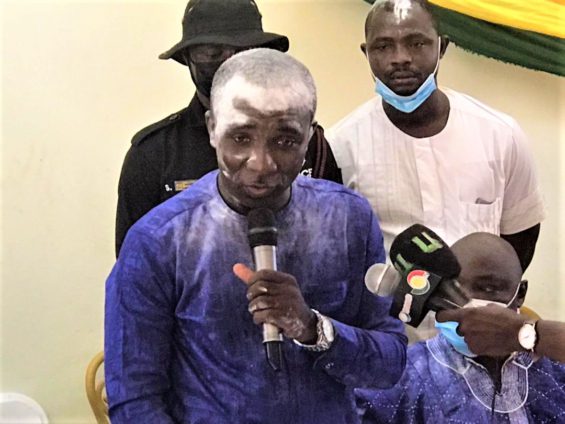 Former Member of Parliament for Nhyiaeso, Kennedy Kankam, has been confirmed as the Municipal Chief Executive for Asokore Mampong in the Ashanti region.

He received an overwhelming affirmation of 100 percent of the votes cast.

All 22 of the 24 assembly members present for the voting exercise, went in favour of Mr Kankam.

Though the voting process was smooth from beginning to end, there was a heavy security presence at the premises of the new assembly office complex.

Ironically, the new MCE barred any form of jubilation, procession or celebration after his confirmation.

In his acceptance speech, he called for unity and advised his supporters to desist from embarking on any form of street celebrations.

“I value every life at Asokore Mampong. This 100 percent means we are all happy but I want to declare that there is not going to be any jubilation out there and no procession, no funfair,…sometimes such jubilations can result in tension…

It will stay this way until I have spoken with security personnel and traditional leaders, and they advise otherwise.

He continued that, “…if anyone want to hold a party of a sort to celebrate this victor, I should be notified for me to access the situation and either give permission or not”.

This call was necessitated because of an earlier reaction in the municipality when his name was mentioned as a nominee for the position.

Some residents and even assembly members had earlier described him as an ‘outsider’ who might not understand the issues of the people.

Meanwhile, former MCE- Alidu Seidu, described Mr Kankam as a worthy successor who can champion the development of the municipality.

“The outcome of the voting sends a strong signal that we are all one. We have worked together in many places and I believe he can do the work”.

He also debunked rumours that the assembly members had demanded some financial reward to confirm Mr Kankam.

Unemployment has been one of the major challenges faced in the municipality, coupled with the lack of factories in the area.

In the wake of this, Kennedy Kankam says he will therefore revive the defunct pencil factory in the municipality as a strategic measure to create jobs.

He also plans to capitalize on the new Kumasi international airport to rebrand the municipality.

Meanwhile, the assembly members were excited about his vision and plans to see through the rebranding