Kofi Adams teams up with NGO to support Buem Schools 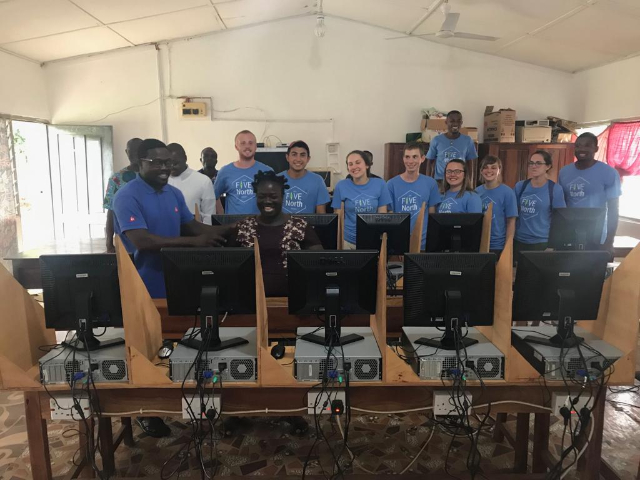 A former National Organiser of the National Democratic Congress (NDC), Kofi Adams and a US-based NGO, ‘The Five North Project’, have provided 38 brand new desktop computers to two schools in the Buem constituency in the Oti Region.

Mr. Victor Kutor, a headteacher who received the items on behalf of the schools expressed gratitude to Mr. Adams and the NGO for their generosity.

He said the gesture will help pupils get hands-on experience in the study of Information Communication Technology (ICT).

He added, the era of teaching and learning ICT in abstract, will be over.

The initiative was inspired by Mr. Kofi Adams, who is currently seeking the mandate of his party to represent the people of Buem in the next Parliament.

Parke-Davis Magyigbe, who represented Mr. Kofi Adams at the donation ceremony, assured the NGO of continuous collaboration towards helping many more schools in the Jasikan District.

He also acknowledged the parliamentary hopeful for showing leadership and prayed for more support for the schools should he eventually emerges victorious in his parliamentary primaries.

The leader of the delegation from The Five North Project, Mr. Austin Barajas, admonished school management to ensure that the devices are maintained and well secured so that pupils and teachers could derive their full benefits

DISCLAIMER: The Views, Comments, Opinions, Contributions and Statements made by Readers and Contributors on this platform do not necessarily represent the views or policy of Multimedia Group Limited.
Tags:
Kofi Adams
Oti Region